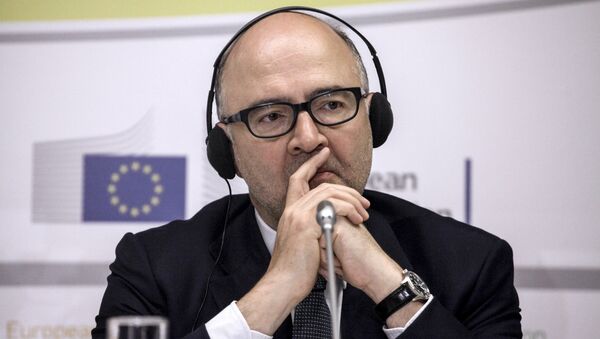 © AFP 2021 / Kostis Ntantamis
Subscribe
The European Commission's rules regarding the budget deficits of member states are “too complex" and need simplifying, the EU's Commissioner for Economic Affairs, Pierre Moscovici has said.

Speaking at an event hosted by Politico, Moscovici said changes needed to be made to the bloc's Stability and Growth Pact, which dictates the level of public spending by member states.

"We need to commit on the coherence of the pact. We can discuss that. Simplify, yes. Destroy? Certainly not."

"Sanctions, even symbolic ones, would not be understood by the public" #EU Commissioner Moscovici on fining #Spain, #Portugal for deficits

​Moscovici also defended the European Commission's decision not to apply budget rules and sanctions on Spain and Portugal earlier this year, saying: "We didn't want to sanction countries that make efforts and that have suffered a lot during the crisis."

"The idea is that sanctions can be used and must be used when necessary, but should be avoided as much as possible," he added. "Sanctioning is always a failure… for the countries but also for the rules."

Moscovici calls Italy's case special. Obtained from Rome special commitment that 2017 budget will be globally in conformity with rules

​The comments back up the commission's decision not to enforce sanctions on Spain and Portugal for missing budgetary targets earlier this year, with the Frenchman saying incentives and reforms were favored over sanctions.

"We're not anti-sanctions, but we want to apply sanctions only when absolutely necessary… With Spain and Portugal, we really made the right decision."

The comments come amid increased debate about EU budgets and the enforcing of sanctions, after German officials called for penalties to be enforced on member states who did not meet guidelines.

It also marks the continued shift in the commission's rhetoric on the issue of budgets, after close to a decade of EU-enforced austerity.

​While Germany has backed the continuation of the EU's tight fiscal measures, a number of member states such as France, Italy, Spain and other Mediterranean countries have grown increasingly frustrated with the status quo, asking for more flexibility on the matter of public spending in order to boost their respective economies.

​With Britain voting to leave the EU, there are growing concerns in Berlin that an "anti-austerity alliance" of Mediterranean member states will gang up on Germany and force changes to EU budgetary rules and guidelines.

The budget issue and spending limits has created another divide within the bloc, already severely torn on issues such as immigration and security.