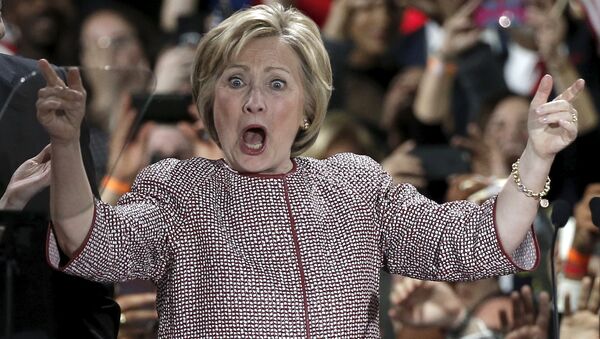 Hillary Clinton is playing the Russia card to win the hearts and minds of American voters and demonize her opponent, Republican presidential nominee Donald Trump. However, many are questioning whether or not Clinton's anti-Russian smear campaign will really work.

When Hillary Clinton gets scared she plays the Russia card, Gary Leupp, Professor of History at Tufts University, Massachusetts, notes in his op-ed for Counterpunch.org.

"Polls are showing Trump and Clinton neck and neck, or even showing the billionaire leading, including in some key states. This brings out the worst, most dishonest streak in Clinton's character. Her response indicates that she remains the eternal Goldwater Girl. Running scared, she resorts to the least creative yet tried-and-true ploy imaginable: Cold War-era style redbaiting," Leupp points out.

Clinton's campaign is pushing ahead with the narrative of Republican presidential nominee Donald Trump cozying up to the Kremlin.

Voting for Anyone But Clinton Means You're Obviously a 'Russian Agent'
For instance, it notes that Trump campaign staffers had played into Russia's hands by removing a call to arm Kiev against Ukraine's breakaway regions from the Republican platform. Clinton's team also points to the fact that Trump's former campaign manager Paul Manafort once worked as a campaign advisor for ousted Ukrainian president Yanukovich, the US academic continues.

The pro-Clinton media sources have even gone so far as to dub Trump and Russian President Vladimir Putin "soul-mates," regardless of the fact the Russian leader has never met the Republican presidential nominee and has barely uttered more than a couple sentences regarding him.

Meanwhile, Hillary Clinton and her campaign are raising the alarm regarding Moscow's alleged interference in the US elections, following "the devastating Wikileaks revelation that the DNC rigged the primary process in favor of Clinton against Sanders."

"But Putin has in fact been diplomatically silent on the US election," Leupp notes, adding that in contrast, the US had openly meddled in the reelection campaign of Russian president Boris Yeltsin back in 1996.

US Has Repeatedly Missed its Chance to Establish Partnership With Russia
However, "Hillary wants to make it clear: she is anti-Putin, anti-Russian, while Trump is a Putin fan," the US academic remarks.

Remarkably, Clinton's smear tactics extend far beyond Trump, Glenn Greenwald of The Intercept pointed out in his August article.

"Those who question, criticize or are perceived to impede Hillary Clinton's smooth, entitled path to the White House are vilified as stooges, sympathizers and/or agents of Russia: Trump, WikiLeaks, Sanders, The Intercept, Jill Stein. Other than loyal Clinton supporters, is there anyone left who is not covertly controlled by or in service to The Ruskies?" Greenwald asked rhetorically.

Commenting on these allegations, WikiLeaks founder Julian Assange remarked in an interview with the broadcaster Fox News that Hillary Clinton's campaign is full of anti-Russian "hysteria."

"The allegations by the Clinton campaign that everyone is a Russian agent are really disturbing. Hillary Clinton, the Democrat… has grabbed on the neo-McCarthyism [1950s anti-communist] hysteria about Russia and has been using it to demonize the Trump campaign," the WikiLeaks founder highlighted.

Crucial Point: NATO's Future Will Depend on Results of US Presidential Election
Predictably, Hillary Clinton pulled the Russian card from her sleeve during the hotly anticipated first US presidential debate, Russian sociologist and political analyst Ilya Ukhov noted in his analysis for Life.ru.

Ukhov drew attention to the fact that Clinton had demonstrated an openly hawkish approach toward Russia and groundlessly accused the Kremlin and personally Russian President Putin of conducting cyber-attacks against the DNC and other US organizations. She also reprimanded Trump, for his alleged Kremlin "sympathy."

Although some viewers believed that Clinton was "the clear winner" of the debate, it is too early to celebrate, the Guardian noted Tuesday.

"The poll was conducted among 521 people — even though those people were all registered voters, that's still not very many views you're collecting… Right now, in polling averages, Clinton currently has 46.7% of support, barely ahead of Trump, who receives 44.3%," the media outlet remarked.