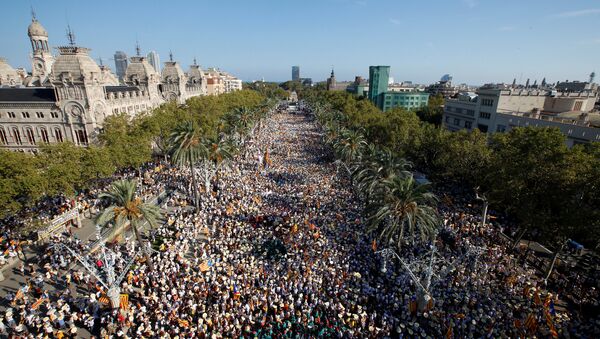 Catalonia would recognize Crimea's status as a part of Russia and scrap anti-Russian sanctions after gaining independence from Spain, Jose Enrique Folch, a spokesman for the pro-independence Catalan Solidarity for Independence electoral coalition, said Wednesday.

MOSCOW (Sputnik) — Sanctions are counterproductive and do not serve to resolve problems, he stressed, adding that differences must be resolved through negotiations.

"If Catalonia gets independence, it will recognize Crimea as a part of Russia. Why shouldn't we recognize Crimea? A referendum was held on the peninsula, and the people decided to join Russia. The results of the plebiscite can only be respected. And even though an independent Catalonia plans to join the European Union, this will not impact the decision. The same goes for anti-Russian sanctions," Folch told the Russian Izvestia newspaper.

Italian MPs Visit Crimea to Show 'Support for Lifting of Anti-Russian Sanctions'
On Sunday, the coalition's international secretary told Sputnik that an Independent Catalonia will put the maximum effort into having good relations with Russia in all spheres.

Catalonia, a Spanish province with an autonomous status, has long sought independence from Spain, but Madrid has repeatedly declined Catalonia’s quest for independence. On November 9, 2014, about 80 percent of the Catalans who took part in a non-binding referendum on the region's status as part of Spain voted in favor of Catalonia becoming a state.

In September 2015, the region's parliament approved setting up a roadmap to achieve independence within the coming 18 months.