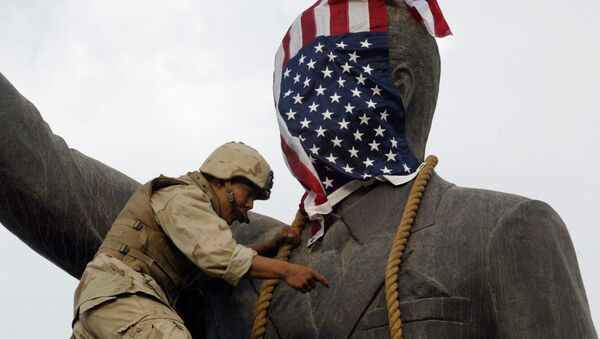 The US government sunk trillions of dollars into the Middle East when it could have used that money to reconstruct the United States, Republican presidential nominee Donald Trump said during the first presidential debate.

WASHINGTON (Sputnik) — The United States could have been rebuilt twice on money Washington spent on its Middle East campaign.

"We have spent $6 trillion in the Middle East… [and] we could have rebuilt our country twice," Trump stated on Monday night.

Trump and Clinton squared off in their first presidential debate of the 2016 US presidential election at Hofstra University in the state of New York, where they differed on a number of issues including free trade, foreign policy, policing and taxes.

Trump Says Daesh Was Formed in Vacuum Created by Obama, Clinton
US inner-cities, Trump continued, have been decimated and the country’s infrastructure and airports resemble those of a third world country.

Trump also noted that President Barack Obama and Clinton’s policies in the Middle East contributed to the rise of the Islamic State.

"ISIS [Islamic State] formed in this vacuum [in Iraq] created by Barack Obama and Secretary Clinton," Trump stated on Monday evening. "You [Clinton] were secretary of state when it [Islamic State] was a little infant. Not it’s in over 30 countries."

Clinton responded by characterizing Trump’s foreign policy positions as dangerous, including his approach to nuclear weapons.

"He has said repeatedly that he didn’t care if other nations got nuclear weapons… It has been the policy of the United States [among both] Democrats and Republicans to do everything we could to reduce the proliferation of nuclear weapons," Clinton stated on Monday evening.

Trump: NAFTA Trade Agreement Defective, Clinton Should Have Addressed Years Ago
Trump claimed that Obama and Clinton not only wasted resources in the Middle East but negotiated defective free trade deals such as the North American Free Trade Agreement (NAFTA), which allowed US jobs to flee to Mexico.

Clinton enjoyed a wider lead in polls after national political conventions in July. However, through September, Trump has closed the gap and current polls either put him as tied or ahead by several points of Clinton.

The US presidential election is scheduled to be held on November 8.