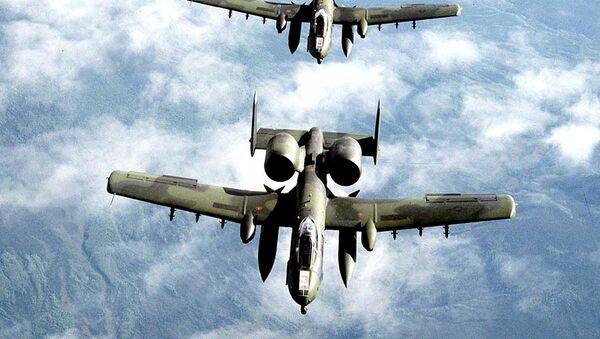 Syria’s intelligence agency has an audio recording of a conversation between Daesh militants and the US military, which transpired prior to the Washington-led coalition’s airstrikes on the Syrian Army near Deir ez-Zor, speaker of the People's Council of Syria Hadiya Abbas said. A Syrian commented on the issue in an interview with Sputnik.

Damascus Has Audio of Daesh Talks With US Military Before Strike on Syrian Army
US warplanes attacked Syrian government forces near the eastern city of Deir ez-Zor on September 17, leaving 62 military personnel killed. The Pentagon said initially that the airstrike was a mistake and that it had targeted Daesh militants.

Abbas also said that after the airstrikes, the US military directed a terrorist attack on the Syrian army.

The incident has jeopardized a US-Russia brokered ceasefire deal on Syria.

According to Syrian lawmaker Muhammad Kheir Al-Akkam, the audio recording proves that the attack was preplanned and was not made by mistake, as the US government claims.

Deir ez-Zor Attack Reveals Washington's 'True Intentions' in Syria
"It took some time to analyze the recording. But the statement by Hadiya Abbas proves that the government possesses the recording," the lawmaker told Sputnik.

According to him, Washington directly and indirectly supports terrorists in Syria.

"The US is lying. The Americans are playing their own game. US senators have said that the US receives an income from various terrorist groups in Syria. Thus, the US is very concerned over Moscow-Damascus coordination," he said.

The lawmaker underscored that even before the audio recording was analyzed, it was obviously not a mistake that five aircraft had carried out five airstrikes in a row. Military analysts pointed out that the attack was deliberate.

"Now, the key point is that the airstrikes were preplanned in coordination with Daesh. It was no surprise that right after the attack Daesh launched an offensive," Al-Akkam said.