Ukraine Finds Itself Pressured by US, Europe to Honor Minsk Accords 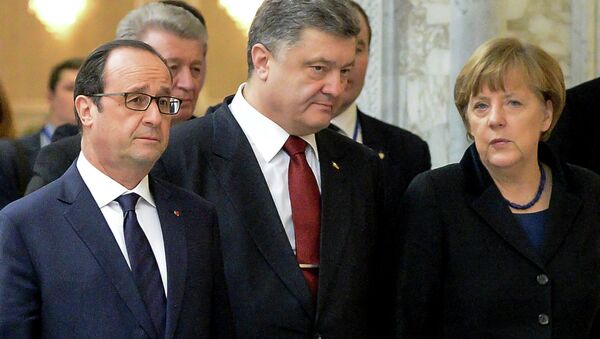 © AFP 2022 / MAXIM MALINOVSKY
Subscribe
The West has begun to pressure Ukraine to accomplish its part of the Minsk agreement, German geopolitical analyst Alexander Rahr pointed out, adding that the major European powers need Russia to solve the Ukrainian economic crisis.

Washington's 'Ukrainian Project': US Adds to Nation's Collapse
As the Minsk agreements hang in the balance, Ukraine has suddenly found itself under pressure from the West, German political analyst Alexander Rahr, scientific director of the Russian-German Forum, writes in his opinion piece for The Huffington Post.

Ukraine is deliberately delaying the process, apparently believing that it can force Europe and the US to further prolong anti-Russian sanctions. At the same time, President Petro Poroshenko is presenting Ukraine as a bulwark of the "free West" against "aggressive Russia".

For a long time, the US and Europe have been turning a blind eye to Poroshenko's self-contradictory narrative, but the situation has changed and Kiev's approach no longer satisfies the West.

"In particular," Rahr writes, "the US needs Russia as a partner in Syria in the fight against Islamic terrorism. As long as the geopolitical conflict in Ukraine continues to brew, trustworthy cooperation in the Middle East is impossible. The US wants a stable, independent and democratic Ukraine. Washington does not understand why the [Ukrainian] government is losing the fight against corruption," Rahr underscores.

Poroshenko Hails Hillary, Blasts Trump Over Claim Russia Not Meddling in Ukraine
Western policymakers have called upon Kiev to implement its part of the Minsk deal and provide the breakaway regions with autonomy in accordance with the agreement.

Kiev would be able to reinstate full control over the state border "throughout the conflict area, starting on day 1 after the local elections and ending after the comprehensive political settlement," the text of the Minsk agreement reads.

Simultaneously, influential voices in Germany have emerged urging the initiation of negotiations with Russia and the Eurasian Economic Union to create a common economic space stretching from Lisbon to Vladivostok.

According to Rahr, that would have helped solve the Ukraine economic crisis.

"The West can not shoulder the financial burden alone," the analyst emphasizes.

He calls attention to the fact that it is the first time when Poroshenko has come under fire from the US. He suggests that the Ukrainian president is likely to find himself in an even more awkward position if Donald Trump is elected. If Trump wins the US presidency, he may seek to establish working relations with Moscow, Rahr assumes.

"The West is… divided over how to handle the Ukrainian conflict," Stratfor's report states.

Kiev Moves One Step Closer to Getting Deadly Arsenal From US
"Although the United States has stood firm in backing Ukraine and pressuring Russia, several countries in the European Union are losing interest in maintaining sanctions on Moscow and have called on Ukraine to do more on its end," the report highlights.

Stratfor's analysts cite Vice President Joe Biden, who signaled last Tuesday that "no fewer than five EU members" are prepared to relax the sanctions on Russia. He added that Washington had specially appealed to Germany, France and Italy to prolong the measures.

On September 17 Slovakia's Prime Minister Robert Fico called upon the EU to end sanctions against Russia, stressing the measures have been ineffective and harmful for the EU states' economy. He also highlighted that Ukraine is doing less than Russia to meet its obligations under the Minsk deal, Reuters reported.

"When speaking about the implementation of the Minsk agreement, it needs to be said clearly that both parties are violating it. Actually, if we were to do an inventory of how Ukraine is meeting it, you would have to say Ukraine is meeting it even less than Russia," Fico told the media outlet.

On the other hand, the West is about to lose its faith in Ukraine, political commentator Bernd Johann noted in his op-ed for Deutsche Welle.

"The conflict with Russia, among other things, serves as an argument to divert attention from shortcomings in its reform policy. Often one can hear the statement that the West could soon leave Ukraine to its faith," the commentator warned.