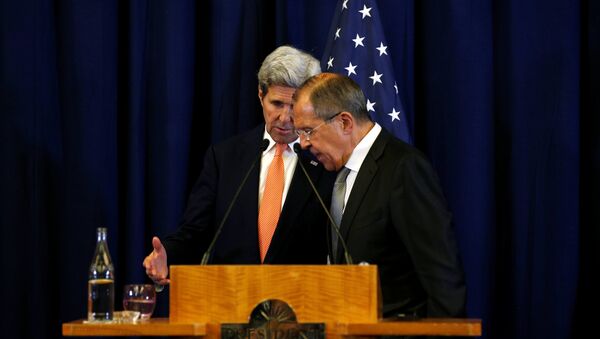 The text of the agreement was published on the site of the Russian Foreign Ministry.

Syria Deal Will Not Result in UNSC Resolution as US Refuses to Make it Public
According to the Russia-US deal on Syria, force can be used for self-defense during the ceasefire, while airstrikes use of mortars and rockets, as well as the capture of territory is prohibited.

The main priority in Syria, according to the document, is the demarcation of territory controlled by Daesh and al-Nusra Front terrorist groups and territories controlled by Syrian rebels.

Russia and the US can exit the deal on Syria if it is not implemented, according to the text of the agreement.

"Every side reserves the right to exit the deal if it believes that its provisions are not implemented."

All Syrians, including members of armed opposition, can leave Aleppo via Castello road, according to the deal.

Neither Syrian army, nor the rebels are allowed to occupy new territory, controlled by the other side. The deal also stipulates areas where the Syrian Air Force will not conduct combat missions.

"The unwillingness [of the US] to publicly confirm their commitment to separate opposition from al-Nusra Front, al-Qaeda's affiliate in Syria, and jointly conduct strikes against terrorists and their partners in crime who did not cease hostilities called for special attention."

Putin Reveals Why US is Against Making Deal With Russia on Syria Public
Moscow urged Washington to make public the mandate of the joint center on the coordination of airstrikes against terrorists in Syria and the agreement on the monitoring of a road to Aleppo.

"Washington assured us in February — seven months ago — that they will apply maximum effort to extract opposition forces of the Syrian opposition it has control over. However, in practice this did not happen, which allowed jihadists to use 'moderate' opposition groups like a shield while continuing their bloody attacks in hope of impunity."

The Russian Foreign Ministry yet again urged the US to fulfill its promise and separate "moderate" Syrian rebels and al-Nusra Front as "many rebel groups Washington considers "moderate" are fighting together with al-Nusra Front and even merged with it."

"We repeat that the policy of connivance toward terrorists causes troubles," the ministry emphasized.

On September 9, Russian Foreign Minister Sergei Lavrov and US Secretary of State John Kerry announced a new plan on Syria, which stipulates a ceasefire that came into force on September 12. However, the cessation of hostilities was declared ineffective because of numerous violations of the ceasefire by Syrian rebels.
Newsfeed
0
Access to the chat has been blocked for violating the rules . You will be able to participate again through:∞. If you do not agree with the blocking, please use the feedback form
The discussion is closed. You can participate in the discussion within 24 hours after the publication of the article.
To participate in the discussion
log in or register
loader
Chats
Заголовок открываемого материала