The Art of Compromise: Will Japan Risk US Ire by Building Up Ties With Russia? 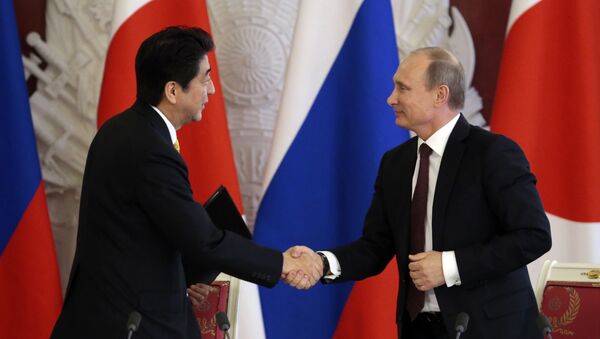 © AFP 2021 / IVAN SEKRETAREV / POOL
Subscribe
When opening an emergency session of the lower house of parliament earlier this week Japanese Prime Minister Shinzo Abe hoped that President Vladimir Putin’s visit to Tokyo in December would help kick start talks over the territorial dispute between Russia and Japan over the disputed Kuril Islands.

In his keynote speech in parliament Shinzo Abe also underscored the importance of Japan’s close partnership with the US in a clear nod to Washington, which has repeatedly signaled its dissatisfaction about the current rapprochement between Tokyo and Moscow.

Japan Mulls Playing Role in Development of Agriculture in Russia's Far East
In an interview with Sputnik Japanese-affairs expert Dmitry Streltsov spoke about the dilemma faced by Japan, which wants to build up ties with its neighbors, including Russia and China, while at the same time avoid antagonizing its key ally in the region – the US.

“The art of a political compromise is a traditional Japanese forte. Hard as it tries to stand up for its national interests, Tokyo is always careful not to go to extremes,” Streltsov said, adding that  in the long run Shinzo Abe would stay the course of maintaining a normal dialogue with Russia.

“There is no alternative to this and every Japanese leader knows that without friendly relations with Russia they will not be able to play the role of a regional and global leader they want for themselves. That’s why I think that in his talks with Putin Abe will have this very much in mind and even if the territorial dispute is not resolved any time soon, relations between our two countries will hardly suffer,” he noted.

Dmitry Streltsov added that relations between Russia and Japan were bound to improve because the US realizes that this is something America will only benefit from.

Japan to Benefit From Ties With Russia Even If Kuril Talks Come to Nothing
“Faced with China’s growing military presence in the region and  other challenges, Washington sees this Russian-Japanese partnership as a stabilizing factor, so it will hardly be trying to undermine this process,” Streltsov continued, adding that even if the US wanted to hamper this fence-mending process, Shinzo Abe has made it perfectly clear that he wants to pursue an independent policy regardless of what Washington may think about it.

During their meeting in May, Shinzo Abe and Vladimir Putin agreed a “new approach” to the territorial dispute over the Kuril Islands, and the Japanese Premier was the only G7 leader to show up at the opening of the 2014 Olympics in Sochi.

“Even though Japan joined the anti-Russian sanctions under strong pressure from Washington, it hasn’t been too keen to enforce them. Shinzo Abe has already had over a dozen meetings with Putin and he hopes that closer economic ties with Russia, including Japanese investments in Russia’s resources-rich Siberia and the Far East, could eventually help resolve the long-running territorial dispute between our two countries,” Dmitry Streltsov said in conclusion.

000000
Popular comments
Russia is wise enough not to give one island back not because that there don't thrust Japan ... My opinion is the Usa terror state has force lap dog Japan to try to make a deal with Russia so there can place rockets on this island !!! PM Abe should proof that he is PM ... and clean up Okinawa !!!!
tobi.gelando
27 September 2016, 20:28 GMT1
000000
Newsfeed
0
New firstOld first
loader
LIVE
Заголовок открываемого материала
Access to the chat has been blocked for violating the rules . You will be able to participate again through:∞. If you do not agree with the blocking, please use the feedback form
The discussion is closed. You can participate in the discussion within 24 hours after the publication of the article.
To participate in the discussion
log in or register
loader
Chats
Заголовок открываемого материала
Worldwide
InternationalEnglishEnglishMundoEspañolSpanish
Europe
DeutschlandDeutschGermanFranceFrançaisFrenchΕλλάδαΕλληνικάGreekItaliaItalianoItalianČeská republikaČeštinaCzechPolskaPolskiPolishСрбиjаСрпскиSerbianLatvijaLatviešuLatvianLietuvaLietuviųLithuanianMoldovaMoldoveneascăMoldavianБеларусьБеларускiBelarusian
Transcaucasia
ԱրմենիաՀայերենArmenianАҧсныАҧсышәалаAbkhazХуссар ИрыстонИронауОssetianსაქართველოქართულიGeorgianAzərbaycanАzərbaycancaAzerbaijani
Middle East
Sputnik عربيArabicArabicTürkiyeTürkçeTurkishSputnik ایرانPersianPersianSputnik افغانستانDariDari
Central Asia
ҚазақстанҚазақ тіліKazakhКыргызстанКыргызчаKyrgyzOʻzbekistonЎзбекчаUzbekТоҷикистонТоҷикӣTajik
East & Southeast Asia
Việt NamTiếng ViệtVietnamese日本日本語Japanese中国中文Chinese
South America
BrasilPortuguêsPortuguese
NewsfeedBreaking
20:40 GMTAustralian Intelligence Chief Says Espionage Soon to Overtake Terrorism Threat
20:33 GMTSpain's Prado Museum Reeling From Unprecedented Protest by Victims of Mass Poisoning
20:16 GMTErdogan's UN Criticism Meant for Home Consumption But Others Will Listen
19:55 GMTSouthwest Drops Plan to Put Unvaccinated Staff on Unpaid Leave in December
19:44 GMTUS Homeland Security Chief Tests Positive for COVID-19
19:24 GMTTop Trump Security Adviser Contradicts ‘Imminent Attack’ Claim Behind Soleimani Assassination
19:19 GMTPoland's Prime Minister Accuses Germany, Nord Stream 2 of Driving Up European Gas Prices
19:15 GMTRepublican Kevin McCarthy Predicts More Democrats to Announce Retirement Fearing Fiasco at Midterms
18:56 GMTWhat's Behind Skyrocketing Number of US Military Suicides & Is US Gov't Doing Enough to Stop It?
18:52 GMTBeijing Demands US Provide Full Details of Nuclear Submarine Incident
18:49 GMTUK Plans to Create 'Persistent' Military Presence in Indo-Pacific Region
18:42 GMTSurveys in 46 Nations Show US International Image Improving Under Joe Biden
18:22 GMTManchester Airport Evacuated Following Reports of 'Suspicious Package'
18:10 GMTFacebook to Cough Up $14Mln in Fine, Payment to Victims in Discrimination Case
18:08 GMTVIDEO: Woman Left in Only Underwear After Attempt at Iconic Dirty Dancing Lift Fails
18:05 GMTYellen Keeps US Bank Transaction Reporting at $10,000, Dropping Wider Net for Tax Cheats
18:03 GMTFrance Refuses to Comment on Asylum Status of Alleged Russian Prison Torture Whistleblower
17:55 GMTNo, Thanks: Queen Elizabeth II Turns Down 'Oldie of the Year' Title
17:46 GMTKamala Harris Accused of Violating IRS Rule After VP Appears in Campaign Video Aired in Churches
17:33 GMTTrump Slams 'Fake News Media' for Treating Late Powell 'Beautifully' Despite 'Big Mistakes' on Iraq