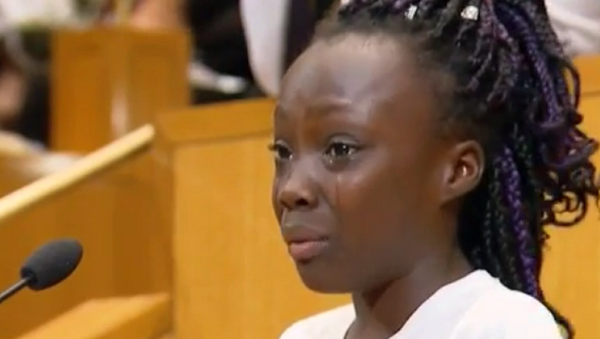 Charlotte Police Video Does Not Show Keith Scott Had Gun as Black Cop Shot Him
They’re demanding the resignations of Mayor Jennifer Roberts and Police Chief Kerr Putney over the killing of Keith Lamont Scott on September 20.

Scott’s death sparked nationwide outrage, and riots in the streets of Charlotte. On Monday however, the protest took a more somber turn as over 50 people, including a tearful young girl, took to the podium.

Zianna Oliphant, 10, broke hearts as she spoke out, barely tall enough to reach the microphone which a young boy had lowered for her.

“I’ve come here today to talk about how I feel, and I feel like that we are treated differently than other people,” she said. “I don’t like how we’re treated. Just because of our color.”

“It’s a shame that our fathers and mothers are killed and we can’t even see them anymore,” Oliphant continued, fighting to speak through the tears. “It’s a shame that we have to go to the graveyard and bury them.”

“We need our fathers and mothers to be by our side.”

On Saturday night, Charlotte police, following a public outcry, released a portion of the footage from the scene showing the last moments before police shot and killed Scott. The video fails to confirm the police version of the story, as there is no handgun visible in Scott's possession within the body-camera frame.

Police are heard demanding that Scott drop a weapon several times, until one of the officers, Brentley Vinson, fatally shoots him four times.

Protesters are calling for the entire video to be released.

000000
Popular comments
This was a black cop shooting a thug. End of story.