Afghans Learned the Art of Torturing Their Prisoners From the West 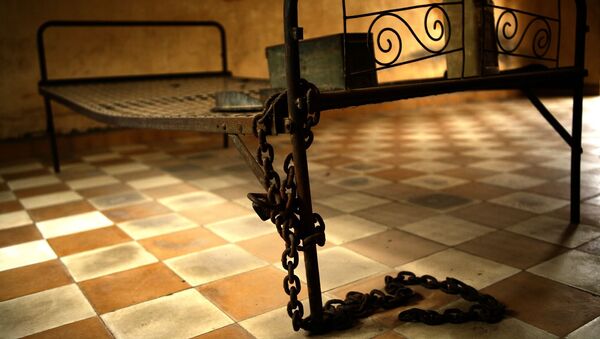 © Flickr / Ray
Subscribe
There were 77 cases of prisoner torture registered in Afghan jails last year, almost 10 times more than in 2000, a local human rights commission announced in a report.

In an interview with Sputnik, Sima Samar, Afghanistan’s Independent Human Rights Commission chief, said that none of those responsible for mistreating prisoners have so far been brought to justice.

“Our commission has registered multiple instances of excesses committed by Interior and National Security Ministry officials working in state penitentiaries. We condemn this practice and hope that such inhuman and anti-Islamic actions will never happen again,” Sima Samar said.

She added that a thorough investigation by state and security officials was the only way to of improving the situation.

According to the report, people suspected of involvement in terrorist attacks and of links to the Taliban were tortured until they started making confessions.

Inmates were forced to stand for hours

UN Claim 35% of Detainees in Afghanistan Conflict Subjected to Torture
Inmates were subjected to various kinds of physical abuse from beatings and electric shocks to being beaten with canes, sticks, rifle butts and whips. Many were also forced to stand for hours on end.

Are all those tortured really guilty?

Judging from the report, however, almost 300 people across Afghanistan were sentenced either by mistake or without any solid proof of their guilt.

These people are the type who could have been subjected to torture.

The report also mentioned hundreds of prisoners who went missing in 2015, adding that the past few years have seen a steady rise in the number of such “disappearances.”