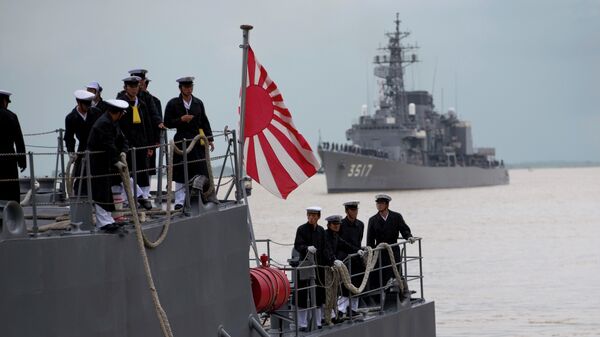 Because of its pacifist constitution, Japan’s Self-Defense Forces have been limited in assisting US military missions. Food, oil, and transportation services could be provided, but giving US forces more direct provisions, like ammunition, was not allowed.

Tokyo made major changes to its constitution in March, however, allowing Japanese troops to operate overseas in an offensive posture for the first time since World War II.

"The agreement we’re signing today will enable us to smoothly implement the (security) cooperation between Japan and the United States, which was expanded by the legislation," Japanese Foreign Minister Fumio Kishida said, according to the Japan Times.

US Ambassador to Japan Caroline Kennedy said the new agreement is "critical to effective cooperation."

"As we work together to modernize our security alliance and provide humanitarian assistance and disaster relief across the Pacific, we will be aided greatly by the integration of effort that this agreement makes possible," she said.

While the amended ASCA does not allow weapons provisions, it does permit Tokyo to provide ammunition to US forces involved in information gathering, antipiracy operations, or snap drills.

The United States and Japan have drawn steadily closer in an apparent bid to stymie China’s growing influence in the region. In the East China Sea, Tokyo and Beijing are at odds over the Senkaku islands. Earlier on Monday, Japan scrambled jets in response to Chinese military air drills flying over the nearby Miyako Strait.

"Regular long range drills in the Western Pacific and patrols over the East China Sea air defense identification zone were for the Air Force to protect China’s sovereignty and national security," China’s air force spokesman Shen Jinke said, according to a statement posted on the Ministry of Defense website.

In the South China Sea, Beijing’s construction of artificial islands in the Spratly archipelago has angered the US and its Pacific allies. While Washington argues that China is attempting to establish an air defense zone, Beijing maintains that it has every right to build within its own territory and that the islands will be used for primarily civilian purposes.

A highly-contested region through which roughly $5 trillion in international trade passes annually, most of the South China Sea is claimed by China, though there are overlapping claims by Brunei, Taiwan, Indonesia, the Philippines, and Malaysia.