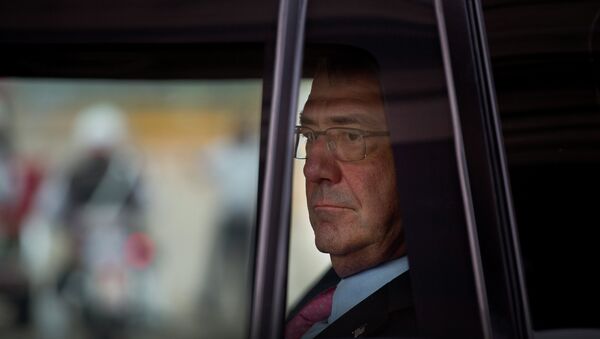 The US-led coalition airstrike on the Syrian Arab Army (SAA) besieged in the city of Deir ez-Zor confirmed Russia's suspicions that US military officials did not plan on delivering on Washington's pledge to launch joint military operations against al-Nusra Front and Daesh, independent investigative journalist Gareth Porter asserted.

The fragile Syrian truce came to an end on September 19 when the SAA announced that it would resume its counterterrorism efforts, "but what provoked the decision to end the ceasefire was the first ever US strike against Syrian government forces on September 17," he noted.

The Deir ez-Zor attack that claimed the lives of at least 62 servicemen "convinced the Russians that the Pentagon had no intention of implementing the main element of the deal that was most important to the Putin government: a joint US-Russian air campaign against [Daesh] and al-Qaeda through a Joint Implementation Centre. And it is entirely credible that it was meant to do precisely that," the journalist said.

Porter pointed out that Russia was interested in the agreement negotiated by Russian Foreign Minister Sergei Lavrov and US Secretary of State John Kerry since it would have allowed the Kremlin to achieve what it has long advocated for. Potential joint operation with the US served as "a powerful incentive" to make sure that the SAA and its allies did not ruin the truce. This was particularly true with regard to Aleppo.

The SAA fulfilled its part of the deal when it withdrew from the Castello Road, a major supply route to the rebel-held areas of the city. For their part, radical groups refused to do the same.

Although the Syrian ceasefire was largely holding despite numerous violations, the United States refused to move to the second phase of the deal unless humanitarian aid was delivered to Aleppo.

"That crucial shift in the US' diplomatic position was a direct result of the aggressive opposition of the Pentagon to Obama's intention to enter into military cooperation with Russia in Syria. The Pentagon was motivated by an overriding interest in heading off such high-profile US-Russian cooperation at a time when it is pushing for much greater US military efforts to counter what it portrays as Russian aggression in a new Cold War," Porter noted.

Syrian Ceasefire Failed 'Because Some in Washington Wanted It to Fail'
The bombing of the SAA base in Deir ez-Zor accomplished what the Pentagon wanted to achieve. The US Central Command issued a statement following the attack, saying that "coalition forces would not intentionally strike a known Syrian military unit." According to CENTCOM, the planes targeted a Daesh fighting position.

The journalist doubted that the air raid was unintentional.

"It is always possible that the strike was another of the monumental intelligence failures so common in war," he said. "But the timing of the strike – only 48 hours before the decision was to be made on whether to go ahead with the Joint Implementation Centre – and its obvious impact on the ceasefire make a tight fit with the thesis that it was no mistake."

In addition, US forces were familiar with the area and had monitored it for several days before the airstrike took place.

In Porter's opinion, Russia and Syria viewed the Deir ez-Zor attack as a "clear message" that the US military would not greenlight "any cooperation with Russia on Syria."