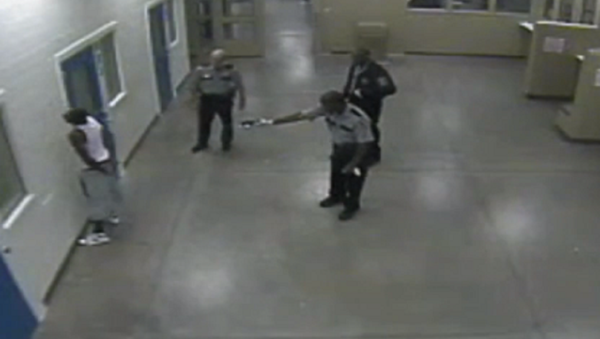 © WSB Screenshot
Subscribe
A federal civil rights lawsuit has been filed against two Georgia police deputies, caught on surveillance video tasing a man while he faced a wall with his hands behind his back, obeying their commands.

The man, Carlos Seals, is suing the two Richmond County deputies, Donnie Crawford and Christopher Alexis, after Seals suffered head injuries and a subsequent stroke in the August 30, 2015, incident.

Cops Beat, Tase Unarmed and Subdued Philadelphia Bike Rider (VIDEO)
The deputies claimed he was “combative” while in the holding area of the Richmond County Jail in Augusta, but video shows otherwise.

Seals admits he used profanity, but was complying with officers’ orders nonetheless.

“None of those facts applied. He was in the surrender position,” DeKalb County based attorney Anita Lamar told local station WSB-TV.

One of the deputies claimed that he “needed” to deploy his taser and, since the first shock was claimed to be ineffective, the second deputy tased Seals again, with both shocks applied to Seals’ back. The deputies stood over Seals’ collapsed body for a minute and a half before checking his pulse.

“I watched him come through the door and he say ‘pop his a**.’ As soon as he said that, dude shot me back,” Seals told WBS. “You don’t shoot a dart and then run electricity through the dart unless they are violently resisting you.”

The department fired Crawford, but has not terminated or disciplined Alexis.

“They are refusing to pay the bills, so now not only does he have injuries to deal with but has bills to pay,” Lamar said.

The Augusta sheriff's office has declined to comment on the case.