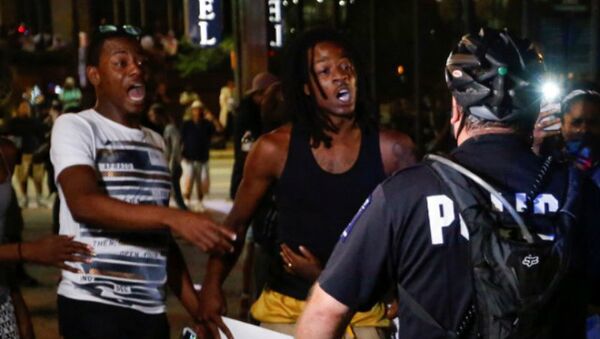 © REUTERS / Jason Miczek
Subscribe
The government of Charlotte, a town in North Carolina, overcome with protests announced that it would abandon the curfew.

Charlotte Police Video Does Not Show Keith Scott Had Gun as Black Cop Shot Him
MOSCOW (Sputnik) — The government of Charlotte, a town in North Carolina, overcome with protests after a fatal shooting of a man by a police officer, announced on Twitter that it would abandon the curfew.

"@CLTMayor and Chairman of the Board of County Commissioners Trevor M. Fuller have lifted the curfew, effective immediately," local government said on its Twitter blog late on Sunday.

A wave of protests has swept over Charlotte since Keith Lamont Scott, a 43-year old African-American man, was fatally shot by a Charlotte-Mecklenburg police officer. The protesters demanded to see police footage of the shooting.

On Saturday, the police made public the videos, which did not clear the situation. The videos provided no conclusive evidence that Scott was armed at the time of the shooting. The investigation is ongoing.