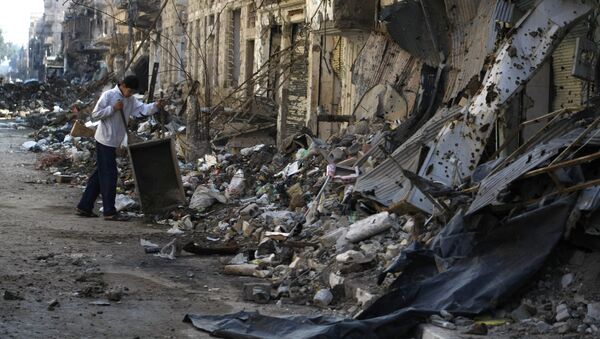 The Syrian truce appears to be a "dead man walking" since it has been virtually impossible to implement the deal negotiated by Russian Foreign Minister Sergei Lavrov and US Secretary of State John Kerry earlier this month due to the fact that there is no proper enforcement mechanism, managing editor for Veterans Today Jim W. Dean asserted.

"This will go down as one of the hardest to negotiate ceasefires; and we can see it began unraveling before the ink was dry," the analyst wrote for New Eastern Outlook. "At the talks, a key ingredient of ceasefire credibility was missing, as there were no enforcement mechanisms in the agreement."

In other words, the deal has failed to offer the means to "rein in the rogue elements caught violating the ceasefire," as the analyst put it. Indeed, the Russian Ministry of Defense recorded more than 300 instances of armed rebel groups violating the secession of hostilities in the seven days after the truce went into force.

"It appears that the opposition groups decided just to go ahead and sign on so the US would have its list to submit to the Russians, and then they did whatever they wanted. We saw this quickly when, in the first few days, the opposition continued to violate the ceasefire, but Kerry and the Western media generally ignored it," Dean observed.

US-backed groups, he added, saw Washington's response or the lack thereof as a carte blanche. "The rebel groups read between the lines that they could use the ceasefire to their advantage, and they did," he said.

Former Obama Advisor: White House Turned Syria Into ‘Problem From Hell’
Ceasefire violations suggest that the US has either no control over what it continues to refer to as the moderate opposition or it is "playing make believe." Dean also pointed to the Gulf states as a possible force that could be trying to ruin the Syrian truce. After all, the Gulf monarchies, particularly Saudi Arabia have long armed, trained, financed and provided supplies to radical groups in Syria trying to overthrow President Bashar al-Assad.

A US-coalition airstrike on the Syrian Arab Army's base in the city of Deir ez-Zor drastically reduced the chances that the ceasefire would hold. The Pentagon later said that the attack was unintentional, but Veterans Today analysts have not been convinced.

They viewed it as "payback" to Damascus and particularly Russia "for being too public about the US side doing all of the ceasefire violations and the Russian requests to have the agreements made public," Dean said.

"All US coalition bombs are GPS guided, and the Syrians have been at the Deir ez-Zor airport position for a long time now. There is no way the US coalition could not have known exactly where they were. This looked like an act of war provocation to cause the Syrian coalition to break the ceasefire themselves in retaliation so the US would put that blame on them, but they did not bite," he explained.

Dean warned that if the ceasefire is not revived a similar attack is possible in the future.

"Nobody knows at the moment, but I can clearly see the preparation for an escalated conflict being put in place, where another 'payback' like we saw in Deir ez-Zor could take the Syrian war into a new realm. There are those who would love to see that, and I think we all know who they are," he said.