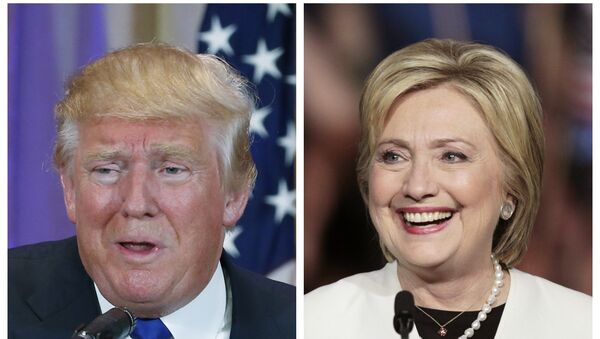 On Monday Night, candidates Donald Trump and Hillary Clinton square off for their first general election debate, a primetime event that is expected to shatter viewing records, despite a large number of the Republican’s fans set to be distracted by Monday Night Football, with television executives projecting an audience over 100 million capturing nearly the entire universe of likely American voters.

Only the two candidates, Trump and Clinton, qualified for the debate pursuant to the rules established by the presidential elections commission that required candidates to poll consistently at or above 15% — a number that Libertarian Gary Johnson fell just short of and protested for entry.

And yet, if the Clinton campaign has its way it appears that there will be more than two participants in the debate on Monday with Hillary’s campaign goading moderator Lester Holt to “fact-check” Donald Trump in real-time with some pro-Clinton news outlets even warning "Don’t Get Lauer’d."

The reference to NBC’s Matt Lauer whose bosses called his performance “an embarrassment” and who became the center of vitriol from media pundits to pro-Hillary voters alike who claimed that the questions he asked of Clinton regarding her private email server that the FBI determined may have imperiled national security deciding only not to prosecute for lack of intent.

The point of contention was that Donald Trump said that he was opposed to the War in Iraq which the Clinton campaign joined in chorus by CNN, MSNBC, the Washington Post, and the New York Times claim was an out-and-out lie pointing to an interview that Trump had with Howard Stern on the one-year anniversary of 9/11 in which he said, "Yeah, I guess so."

However, as more information unfolded Trump actually changed his position prior to the decision to invade Iraq telling Fox Business Channel’s Neil Cavuto in January 2013 that "perhaps [George W. Bush] shouldn’t be doing it yet and perhaps we should be waiting for the United Nations, you know."

Nonetheless, the Clinton campaign has demanded that the debate moderator fact-check Trump on the spot (but not Hillary) because the Republican nominee purportedly lies at an unusually high volume. Of course, in the latest McClatchy-Marist poll, 44% of voters found Trump to be "honest and trustworthy" while only 38% of voters said the same was true of Clinton.

On Sunday, Hillary’s campaign manager Robby Mook sat down with George Stephanopoulos ABC’s This Week to discuss the new campaign tactic ahead of the debate.

"You guys have been pushing pretty hard, this idea of a double standard, and saying its up to the moderator to point out falsehoods, but the debate commission’s been pretty clear that they think it’s the job of the moderator basically to get out of the way, just ask the questions," said the host.

Mook responded saying "All that we’re asking is that, if Donald Trump lies, that it’s pointed out. It’s unfair to ask Hillary both to play traffic cop while with Trump, make sure that his lies are corrected, and also to present her vision for what she wants to do for the American people."

A somewhat shocked Stephanopoulos then asked, "But isn’t that what a debate is supposed to do?" to which Mook responded that "Donald Trump is special, we haven’t seen anything like this… we normally go into a debate with two candidates who… don’t lie as frequently as Donald Trump does."

Providing a metaphor for the problem that has been plaguing Clinton’s candidacy since the beginning Mook argued that Hillary was entitled to preferentially treatment at the debate – "We’re saying this is a special circumstance, a special debate."