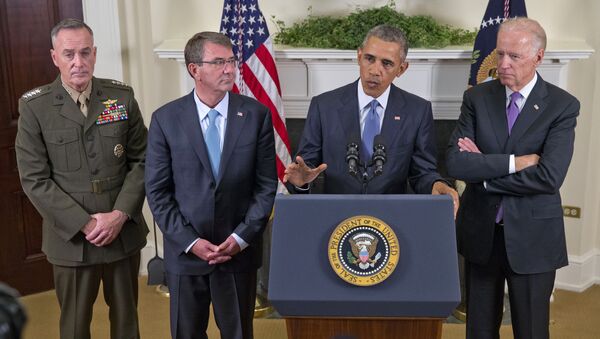 © AP Photo / Pablo Martinez Monsivais
Subscribe
It is a little hard to believe that the US Air Force's attack on the Syrian Arab Army was a mere accident, Professor Stephen F. Cohen noted, warning the US party of war, which is adamantly opposed to any cooperation with Russia, is growing more and more influential in Washington.

The US party of war is "adamantly opposed" to any cooperation with Russia, Stephen F. Cohen, professor emeritus of Russian studies at Princeton University and New York University, remarked commenting on the recent developments in Syria on The John Batchelor Show.

"[What's important to be said is that] the attack on the Syrian forces [in Deir ez-Zor], which the US Air Force admitted that it did do by accident, it said, the attack on the humanitarian convoy headed for the destitute people of Aleppo and in that region (was attacked we don't know about whom)… — these pieces are linked to the [Syrian ceasefire] agreement," Professor Cohen emphasized.

US Massacre of Syrian Soldiers Exposes Washington's Mendacity
"The agreement specified that if for seven days the conditions agreed upon were met — and they included a ceasefire in various areas and humanitarian relief to Aleppo — that at the end of seven days something if not historic but exceedingly important would happen: the United States and Russia would join military arms and together wage air war against various terrorists in Syria. The importance of that cannot be overstated," the American academic stressed.

He called attention to the fact that it would be the first real military cooperation between Moscow and Washington since a New Cold War began several years ago. Cohen underscored that it could lead to cooperation elsewhere, including the troubled Baltic region, where NATO is beefing up its military presence, and Ukraine.

However, the US scholar noted, there are forces in Washington which seek to disrupt the US-Russian détente.

Attack on Syrian Army is 'Case of Pentagon Trying to Show State Dept Who's Boss'
Given the fact that US warplanes knew the Deir ez-Zor region very well and that the US Department of Defense (DOD) had openly expressed its skepticism regarding the US-Russian plan on Syria, it is "a little hard to believe" that the attack on the Syrian Arab Army  was an "accident," Professor Cohen suggested.

He quoted the New York Times editorial, which read that "at the Pentagon, officials would not even agree that if a cessation of violence in Syria held for seven days — the initial part of the deal — the Defense Department would put in place its part of the agreement on the eighth day."

The editorial also referred to Carter, "who has deep reservations about the plan for American and Russian forces to jointly target terrorist groups."

"In other words," Cohen noted, "Pentagon officials refused to say whether they would obey President Obama."

The US academic stressed that in a Constitutional democracy where the military is clearly subordinated to the civilian leadership that is extraordinary.

"We've come to a point in this craziness, in this New Cold War with Russia where DOD is openly saying it may or may not obey President Obama. If DOD will say that publicly you can imagine the opposition in Washington against the Syrian deal, [US Secretary of State John] Kerry brokered with Russian Foreign Minister [Sergei] Lavrov," Professor Cohen highlighted.

The professor remarked that the opposition comprises very influential figures from the Pentagon, the US State Department, both Democratic and Republican parties and the US' mainstream media. 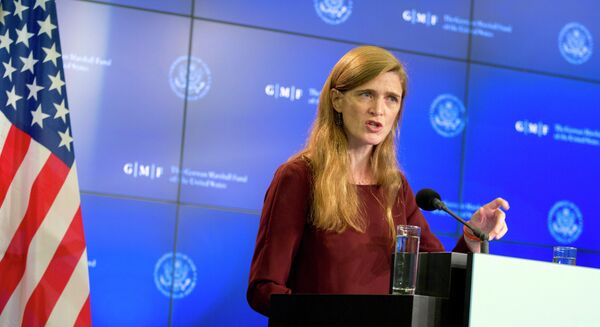 'Stab in the Back': What Awaits Syria After American 'Friendly' Fire
He recalled that such a situation is not new: during the previous 40-year Cold War the US party of war had repeatedly thrown a wrench in the Russo-American détente.

Cohen drew historical parallels between the Deir ez-Zor attack and the 1960 U-2 incident, when a US U-2 spy plane was shot down in Soviet airspace. What is remarkable about this historical episode is that it occurred while Soviet leader Nikita Khrushchev and Dwight D. Eisenhower were seeking a détente. The CIA-led incursion ruined the possibility of the US-Soviet rapprochement, the US professor explained.

Today, while Russia opposes the US neocons' idea of a US-led unipolar world order, the American party of war is determined to do whatever it takes to isolate Russia.

Russian analysts echo Professor Cohen: according to Stanislav Tarasov, Russian expert and head of the Middle East-Caucasus think tank the Deir ez-Zor attack as well as the assault on the UN humanitarian convoy could be the two links in one and the same chain.

Tarasov, the Pentagon could have deliberately tried to undermine the US-Russian deal on Syria.

For his part, Yevgeny Satanovsky, head of the Moscow-based Middle East Institute, expressed doubts regarding the fact that the US-led coalition's airstrike was just an accident. The expert stressed that the attack is likely a reflection of the ongoing struggle between the US military and diplomatic establishments and an attempt by the Pentagon to "show the State Department who's boss."

RIA Novosti political analyst Alexander Khrolenko suggested that some forces are obviously trying to throw the US-Russian Geneva initiative into question and swing the balance in their own favor. He referred to the fact that the US' Middle Eastern partners have recently intensified their activity in the region.

"It seems that a new division of spheres of influence is on the cards, and a diplomatic solution [to the Syrian crisis] is becoming more and more unlikely," Khrolenko assumed.

000000
Popular comments
Kill a few americans like they are doing to people all over the world and see if they are still so keen to pick a fight and save the "MAD" WWIII reaction because that record has been played to death. Meet force with force or bend over and obey.

Jammy
24 September 2016, 21:04 GMT4
000000
As time goes by, it's looking more and more like the vice presidents are the ones with the control, Cheney and Bush and now Biden and Obama. I think the majority of the people around the world will be glad to see the end of the Obama tyranny even though the choice of Trump or Clinton becoming the next POTUS scares the life out of everybody.
happy1
24 September 2016, 21:24 GMT4
000000
Newsfeed
0
New firstOld first
loader
LIVE
Заголовок открываемого материала
Access to the chat has been blocked for violating the rules . You will be able to participate again through:∞. If you do not agree with the blocking, please use the feedback form
The discussion is closed. You can participate in the discussion within 24 hours after the publication of the article.
To participate in the discussion
log in or register
loader
Chats
Заголовок открываемого материала
Worldwide
InternationalEnglishEnglishMundoEspañolSpanish
Europe
DeutschlandDeutschGermanFranceFrançaisFrenchΕλλάδαΕλληνικάGreekItaliaItalianoItalianČeská republikaČeštinaCzechPolskaPolskiPolishСрбиjаСрпскиSerbianLatvijaLatviešuLatvianLietuvaLietuviųLithuanianMoldovaMoldoveneascăMoldavianБеларусьБеларускiBelarusian
Transcaucasia
ԱրմենիաՀայերենArmenianАҧсныАҧсышәалаAbkhazХуссар ИрыстонИронауОssetianსაქართველოქართულიGeorgianAzərbaycanАzərbaycancaAzerbaijani
Middle East
Sputnik عربيArabicArabicTürkiyeTürkçeTurkishSputnik ایرانPersianPersianSputnik افغانستانDariDari
Central Asia
ҚазақстанҚазақ тіліKazakhКыргызстанКыргызчаKyrgyzOʻzbekistonЎзбекчаUzbekТоҷикистонТоҷикӣTajik
East & Southeast Asia
Việt NamTiếng ViệtVietnamese日本日本語Japanese俄罗斯卫星通讯社中文（简体）Chinese (simplified)俄罗斯卫星通讯社中文（繁体）Chinese (traditional)
South America
BrasilPortuguêsPortuguese
NewsfeedBreaking
18:08 GMTVolcano Continues to Erupt on Spanish Island of La Palma
17:49 GMT'US Hegemonic System' Has 'Failed Miserably', Iran's Raisi Tells UN
17:24 GMTUSAF Reveals It Has Five New B-21 Strat Bombers in Production, Not Two as Originally Reported
17:07 GMTAncient Pyramid Made From Volcanic Ash Likely Built to 'Calm Earth’s Anger,' Media Says
17:00 GMTDozens Protest Outside UN Headquarters Against US Global Military Engagements
16:43 GMTUS House Democrats Introduce Legislation to Prevent Presidential Abuses
16:35 GMTPalestinians Ready to Renew Talks With Israel If They Show Readiness, Foreign Minister Says
16:31 GMTRussian Embassy in UK Slams Scotland Yard's Approach to Fact-Finding in Skripal Case
16:30 GMTWhat's Going On? Dog Looks Terrified as It Hears People Quarrelling
16:29 GMTSpanish Press Slams Barcelona After Spanish Giants Fail to Beat Minnows Granada in La Liga
16:26 GMTUS Suddenly ‘Concerned’ About Shortages of Gas in Europe After Spending Years Fighting Nord Stream 2
16:06 GMTAUKUS Will Not Have Any Impact on Quad, Says Indian Foreign Secretary Ahead of Leaders' Summit
16:02 GMTUS Space Force Commander Claims Russia Has Armed Satellite in Orbit to Destroy US Assets
15:54 GMTLust For Money, Not Sex Game, Killed British Heiress, Swiss Court Has Heard
15:40 GMTUS Sanctions Russia-Based Cryptocurrency Exchange Platform SUEX OTC
15:29 GMTMessi to Miss PSG's Next Game Against Metz as Club Confirms Argentine's Knee Injury
15:20 GMTScientists Developing Versatile ‘Nano Couriers’ for Future Medicine
14:56 GMT'To Ban or Not to Ban': US Agencies Reportedly Split on Whether to Blacklist Huawei's Spinoff
14:28 GMTSotheby's to Hold First-Ever Art Sale Show in Post-Soviet Russia
14:19 GMTSpanish Island of La Palma's Airport Operating Normally Amid Volcano Eruption