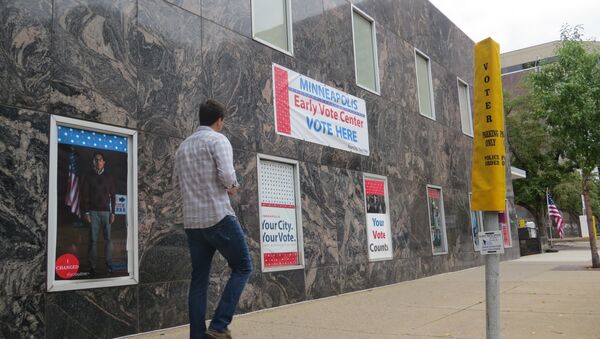 © Sputnik / Cassandra Fairbanks
Subscribe
The US electoral system contains a wide variety of arbitrary state rules and regulations, causing many to ask whether America is a democracy, or something else.

Amid early voting in Minnesota and the upcoming Monday presidential debate, Brian Becker of Radio Sputnik's Loud & Clear is joined by Richard Winger, publisher and editor of Ballot Access News, to discuss US election laws.

Winger compared early voting with a jury trial. "This early voting is like letting some of the juries cast their vote before the trial is over," he offered, "I think it should be limited to just three weeks before the election."

Requirements for submitting one's candidacy to be president differ widely from state to state. In North Carolina, for example, a prospective nominee must acquire 89,000 ballot signatures by June 9th, six months prior to the election. In Colorado, by contrast, a person can get on the ballot for the presidential elections in November by simply paying a $1000 fee. Currently Colorado has 23 presidential candidates on the ballot.

The system of "each state has one vote," comprising the House of Representatives is "very tilted toward the Republicans," suggests Winger.

He remarked that, "It would be overwhelmingly funny if Donald Trump gets more popular votes but Hillary Clinton gets more electoral votes. It's not likely to happen. It's conceivable, and that would be a lesson for the Republican Party they should have changed the system."

Historically, the popular vote has been superseded out of a fear that the black population in the US would influence the election. Winger suggested that the fear persists. "The only jurisdiction in the US with a big majority of non-white people is the District of Columbia. We are the only country in the world that has this absurd policy that adult citizens living in the national capital have no voting representation on the national legislature."

Loud & Clear host Becker agreed, stating that, "it really is the negation of democracy."

000000
Popular comments
There is no democracy ! The powers in charge give false impressions that we are in a democracy but they know we are not ! They are in control of everything in our lives. They are also responsible in creating chaos amongst the people. They purposely divide the people in order to distract them...... You see if the people are distracted by race divisions , religious divisions then the people won't see how corrupt the powers that be really are.

Adrienne Adonis
24 September 2016, 06:26 GMT
000000
All depends on what you call democracy. Every individual and every country has its own definition. Do you believe that the below quotes apply to a "democracy"? Instead of giving a politician the keys to the city, it might be better to change the locks. ~Doug Larson~ A politician is a fellow who will lay down your life for his country. ~ Tex Guinan~ Politicians are people who, when they see light at the end of the tunnel, go out and buy some more tunnel. ~John Quinton~ I have come to the conclusion that politics is too serious a matter to be left to the politicians. ~Charles de Gaulle~
Novus Ordo Seclorum
24 September 2016, 08:23 GMT
000000
Newsfeed
0
New firstOld first
loader
LIVE
Заголовок открываемого материала
Access to the chat has been blocked for violating the rules . You will be able to participate again through:∞. If you do not agree with the blocking, please use the feedback form
The discussion is closed. You can participate in the discussion within 24 hours after the publication of the article.
To participate in the discussion
log in or register
loader
Chats
Заголовок открываемого материала
Worldwide
InternationalEnglishEnglishMundoEspañolSpanish
Europe
DeutschlandDeutschGermanFranceFrançaisFrenchΕλλάδαΕλληνικάGreekItaliaItalianoItalianČeská republikaČeštinaCzechPolskaPolskiPolishСрбиjаСрпскиSerbianLatvijaLatviešuLatvianLietuvaLietuviųLithuanianMoldovaMoldoveneascăMoldavianБеларусьБеларускiBelarusian
Transcaucasia
ԱրմենիաՀայերենArmenianАҧсныАҧсышәалаAbkhazХуссар ИрыстонИронауОssetianსაქართველოქართულიGeorgianAzərbaycanАzərbaycancaAzerbaijani
Middle East
Sputnik عربيArabicArabicTürkiyeTürkçeTurkishSputnik ایرانPersianPersianSputnik افغانستانDariDari
Central Asia
ҚазақстанҚазақ тіліKazakhКыргызстанКыргызчаKyrgyzOʻzbekistonЎзбекчаUzbekТоҷикистонТоҷикӣTajik
East & Southeast Asia
Việt NamTiếng ViệtVietnamese日本日本語Japanese俄罗斯卫星通讯社中文（简体）Chinese (simplified)俄罗斯卫星通讯社中文（繁体）Chinese (traditional)
South America
BrasilPortuguêsPortuguese
NewsfeedBreaking
01:14 GMTUS Judge Orders Facebook to Turn Over Deleted Posts That Promoted Hate Toward Rohingya People
01:07 GMTLeader of Drought-Stricken Madagascar Urges UNGA to Take Tougher Action Against Climate Change
00:43 GMTBatting Below the Poverty Line: How MLB Exploits Its MiLB Workforce
00:37 GMTPakistan-Afghanistan Border Clash Reportedly Caused Deadly Stampede
YesterdayNY Gov. Hochul Announces Resignation of State Health Commissioner Who Oversaw Nursing Home Scandal
YesterdayBipartisan US Majority Wants Government to Hold Big Tech Responsible for Content - Poll
YesterdayUS House Committee Chairman Issues Subpoenas to Meadows and Bannon Over Jan 6 Riot
YesterdayTwitter Says Bitcoin Now Part of its Tipping Service
YesterdayBurundi's Prosecutor General Says MSD Opposition Party Leader Behind Series of Terror Acts
YesterdayVideo: Protesters Storm Namibia’s Parliament as Opposition Rejects ‘Fake Genocide Deal’ With Berlin
YesterdayUS Stocks Rally for 2nd Day as Federal Reserve Assures Care Over Stimulus Taper
YesterdayOut-Torying the Tories? Labour Leader’s ‘Vision’ Pamphlet Lays Out Return to Blairism
YesterdayFBI Issues Arrest Warrant for Brian Laundrie in Connection to Gabby Petito's Death
YesterdayItalian Authorities Arrest Ex-Catalan Head Carles Puigdemont, Spanish Media Reveals
YesterdayRussian Rescuers Searching for 19 Elbrus Climbers in Distress, One Found Dead
YesterdayMoscow Regrets Oberlander Evaded Punishment – Russian Embassy in Canada
Yesterday‘Perhaps You Remember Your First Edible’: Brian Williams Zinger After Montage Gets Internet Rolling
YesterdayCDC Panel Endorses Pfizer Booster Shots for Older, At-Risk Americans
YesterdayTennessee Kroger Shooting Leaves 1 Person Dead, 13 Hospitalized After Gunman Opens Fire
Yesterday'Cutting Off Hands Necessary for Security': Taliban Founder Says Brutal Punishment Won't Go Away