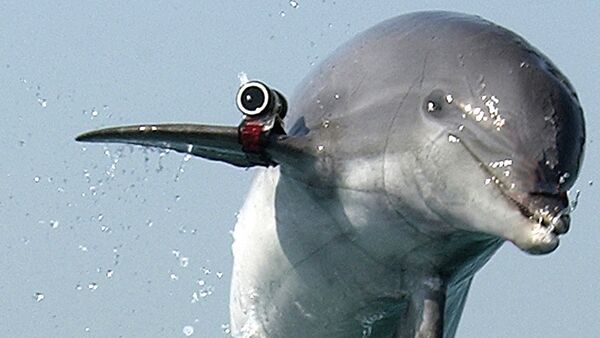 CC0 / /
Subscribe
Last week, Ukraine's Defense Ministry released photos showing military personnel undergoing psychological rehabilitation with the help of dolphins at the State Oceanarium military research center. According to military analyst Sergei Ishchenko, this may be proof that Kiev has decided to revive its combat dolphin program. But will it work?

On Monday, the Defense Ministry's press service published photos of Ukrainian Navy personnel who had taken part in the fighting in Donbass undergoing rehabilitation with the help of dolphins at the Armed Forces' State Oceanarium science and research center in Odessa.

According to State Oceanarium head Colonel Andrei Donchak, the theraputic use of dolphins to heal the wounded bodies and minds of personnel fighting in Ukraine's civil war was an important new direction for him and his staff.

However, according to Sergei Ishchenko, a military analyst for the Svobodnaya Pressa online newspaper, there's something much more important to this story: "What we have before us is the first public acknowledgement that Kiev has recently begun organizing the training of fighting dolphins; or is on the verge of doing so. After all, the secret research station to train the marine animals couldn't have been set up just to swim with combat veterans, could it?"

Stratfor Says Ukraine Ceasefire Might Work…As Congress Prepares to Send Weapons
If Kiev really has decided to resume the training of military dolphins, the question that immediately arises, according to the expert, is "using whose money?" After all, he noted, combat dolphin training requires sophisticated equipment and specialized training methodologies, and these don't come cheap.

Ishchenko recalled that until recently, only two countries have had any significant success in the use of marine mammals for underwater warfare – the United States and the Soviet Union (later Russia). "In principle, for both countries, there are only three uses for so-called 'fighting bio-technical systems', including dolphins, seals and sea lions: to fight against underwater saboteurs and protect naval bases; to search for and destroy naval mines; and to discover and raise sunken objects."

The US began their experiments in this field in its the Pacific Island territories, and in Hawaii, beginning in the 1960s. In the 1970s, six trained dolphins were used to defend the port at Cam Ranh Bay, South Vietnam from saboteurs. In 2003, combat dolphins were believed to have been used to help demine Umm Qasr port in Iraq. Currently the US Navy is estimated to have 24 demining dolphins, along with 50 dolphins and 30 sea lions for other purposes. The program has an annual price tag of about $20 million.

The Soviet combat dolphin program was even more secret, Ishchenko noted, with the Soviet Navy establishing a secret research center in Sevastopol in 1972. "Within its first four years, combat bio-technical systems using dolphins and divers were incorporated into the emergency rescue service of the Black Sea Fleet, called the 1329-th special purpose group. In the space of several years, four dolphins from the group found over 40 sunken mines, torpedoes and missiles at the bottom of the sea."

The Secret Soviet Plan to Build Nuke Bases on Desolate Islands Near the USA
A similar center was formed in the Pacific Ocean in 1983, working with beluga whales. Later, the training of seals began in Sayda Bay, Murmansk, for the Northern Fleet. But the center at Kazachka Bay, Sevastopol remained the main training center, and was well-equipped with specialized facilities, swimming pools, laboratories, research boats and minisubs.

"After the collapse of the USSR, the dolphinarium at Kazachka Bay was transferred to Ukrainian jurisdiction, changing its name to the State Oceanarium." Its contingent of bottlenose dolphins was partially 'demobilized', and their use for swim therapy became a very profitable business. "One hour of swimming in the once top-secret pool cost up to a hundred dollars," the analyst recalled. At the same time, the center continued to receive state financing (about $3.5 million a year).

Just prior to the 2014 Maidan coup, Ukrainian Defense Ministry inspectors attempted to determine where the state funds were going,  discovering that beginning in 2000, under the guise of scientific research, researchers had engaged in commercial shellfish production. It was also discovered that three dolphins and one sea lion had been smuggled out of Ukraine, and that another seven dolphins had been 'leased out' to commercial dolphinariums in Turkey and Lithuania. Investigators concluded that the  State Oceanarium's activities were "not directed toward solving the tasks of the development and use of Ukraine's armed forces."

Shadowy Ex-DARPA Head Becomes Consultant to Ukraine's Military Industry
While the criminal investigation was going on, the city of Sevastopol, together with the rest of Crimea, voted to rejoin Russia. The remaining 15 bottlenose dolphins at the oceanarium were put to use by the Black Sea Fleet. About a dozen personnel, including Colonel Donchak, left Sevastopol for Odessa. The rest of the research center's personnel remained at their posts.

Over the past two years, Donchak has worked to try to convince authorities to give him the right to use former sports club swimming pools in the Odessa military district; these had been converted for use by marine animals by local businessmen from the Nemo dolphinarium chain. According to Ishchenko, the dolphins now being used by Donchak likely belong or used to belong to Nemo.

The main question, the journalist says, is where Kiev managed to find the millions of dollars necessary to rebuild its combat dolphin program. "Kiev could not find the money to repair its small fleet of warships, but it has the funds to train fighting dolphins? Where did they get it?" he asked.

The answer, Ishchenko noted, may have everything to do with the NATO mine countermeasures training exercises held in the Black Sea. While conducting regular annual training operations in the Black Sea in 2015, the alliance took the unprecedented step of using American combat dolphins in the operation (20 dolphins and nearly a dozen sea lions, flown in from San Diego).

"But transporting dolphins to the coast of Russia's Sevastopol from the Pacific is expensive, even for the well-fed US Navy," the journalist explained. "It's much cheaper to prepare them in Ukraine's Odessa – using Pentagon cash which can easily be transferred to Kiev as fraternal aid. If I'm correct, the sudden resurrection of the State Oceanarium military research center should be of no surprise; Colonel Donchak would get everything he needs – financing, trainers, and equipment…"

Saudis Revealed as Possible Secret Buyer of Ukraine's 'Grom' Missile System
Contacting Captain 1st Rank (ret.) Alexander Zhdanov, the former head of the Soviet dolphin training program at Sevastopol, Ischenko asked whether the resurrection of the Ukrainian combat dolphin project has any chance of success. The answer, according to Zhdanov, is that without significant funds, the program won't go anywhere.

Zhdanov recalled that "in close cooperation with the Naval Academy and many other organizations, we were able to create three biotechnical systems (search and rescue, anti-sabotage and anti-mine) which in many ways were superior to those created by the US. The cost of this work was approximately equal to that of one Kashin-class destroyer. But over the course of a quarter century, independent Ukraine was not able to find the money for even one ship with much more modest capabilities. Where are they going to get the money for dolphins?"

However, the officer admitted that if US financial assistance were made available, it's entirely possible that the Ukrainian Armed Forces could create a functional combat dolphin program in several years' time. It's a matter of time and resources, Zhdanov said.

000000
Popular comments
Given the Pentagon and its offshoot DARPA's more insane ventures into the world of weird and wonderful warfare and its delivery methods,one cannot discount the possibility.