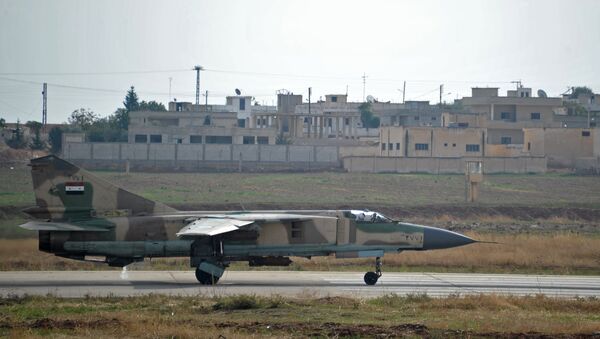 The demands to ground the Syrian aviation are a clear violation of the country's sovereignty, Damascus won't do that regardless the demands from the US and Germany, according to Mohamed Khair al-Akkam, Syrian parliamentarian and member of the Syrian Arab Republic delegation for the intra- Syrian dialogue in Geneva.

No-Fly Zone in Syria to Benefit Terrorists, 'Who Have Everything But Aircraft'
Syria won't ground its combat aviation regardless of demands from the US and Germany, which say that this will allegedly allow to the cessation of hostilities to be maintained, Mohamed Khair al-Akkam, Syrian parliamentarian and member of the Syrian Arab Republic delegation for the intra- Syrian dialogue in Geneva told Russia's Izvestia newspaper.

"It goes without saying that Syria will never agree to stop the flights and its airstrikes on the armed groups due to a very simple reason: we are being offered to stop eliminating those who, even regardless the ceasefire, continued their fighting against the Syrian army and kept killing civilians," the Syrian politician told the newspaper.

"Moreover, such demands represent an evident attempt to violate Syrian sovereignty. Damascus has every right to defend its territories and its people from terrorists and this is exactly what it is doing," he further stressed.

The parliamentarian added that the best way to maintain the cessation of hostilities in his home country would be through adherence to the  agreements already in place.

However there is no sense talking about the ceasefire when Syria is alone in following the accords while the terrorists continue fighting.

Kerry's 'Parallel Universe' in Syria Revealed in 'Scant, Factless Show'
The above comments come as s follow up to the recent push of US Secretary State John Kerry to set up a no-fly zone in the country by claiming it will give the collapsing ceasefire agreement a chance of surviving and restore trust in the process.

On Friday, German Foreign Minister Frank-Walter Steinmeier used his speech before the United Nations General Assembly to reiterate the call for a ban on flights above the country claiming it could "facilitate a ceasefire."

Meanwhile, Member of Russia's State Duma (lower chamber of the Russian parliament) Committee on international affairs Anvar Makhmutov told the newspaper that the demands of Washington and Berlin are strange, to say the least, as they clearly pursue goals far from the "facilitation of ceasefire."

"It is surprising that [the US and Germany] address these calls to Russia and Syria and not to their own coalition," the politician said.
In fact, he added, Kerry and Steinmeier want to restrict Syria's and Russia's impact on the situation at the battlefield, primarily, in Aleppo.

There is a clear desire between such calls to facilitate the positions of the militants.

At the same time neither Kerry nor Steinmeier called on the extremists, which the West regards as the so-called "moderate opposition" to halt their fighting and thus save the ceasefire, the Russian deputy noted.

Russia Strongly Objects to No-Fly Zone in Syria
He further reminded that it is due to the actions of the US and its coalition the ceasefire agreement is falling apart.

"Russia has made strong efforts to convince Syria to agree to the ceasefire however after the recent strikes of the US-led coalition on the positions of the Syrian army at Deir ez-Zor both Damascus and Moscow were stabbed in the back," the politician stated.

Earlier on Thursday, Iranian President Hassan Rouhani stated that a no-fly zone in Syria will only serve to  strengthen foreign-sponsored terrorists in Syria.

"A no-fly zone (in Syria) will benefit terrorists, who have everything expect for military aircraft," the Iranian leader said during a presser after his speech at the 71st United Nations General Assembly session in New York.