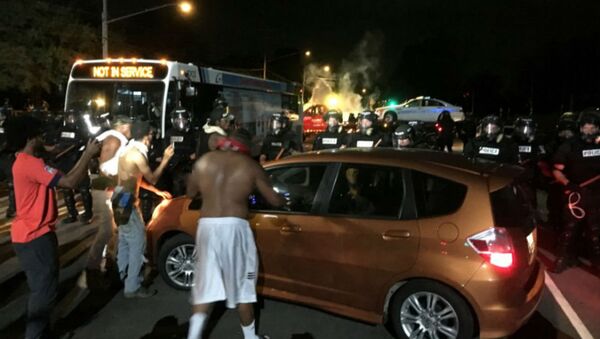 © REUTERS / Reuters
Subscribe
Charlotte Police released video footage that does not show Keith Scott had a gun in his hand as opposed to a book as some witnesses claimed, which police on the scene demanded he drop before Brentley Vinson, an African-American cop, discharged his weapon killing the suspect.

Charlotte Police released footage at the request of the public on Saturday night showing the last moments before police shot and killed Keith Scott which led to riots and mass protests throughout the week. The video fails to confirm the police rendition of facts as no handgun is visibly shown within the body camera frame in Keith Scott's possession. Police demanded that Scott drop his weapon several times until one of the officers, Brentley Vinson, discharged his weapon four times killing Scott.

The video still contrasts with eyewitness accounts provided by members of the Scott's family, including his brother, that the man was holding a book in his hand and was killed by a white officer. Scott's brother told the media following the shooting that "all white people are the devil, all white cops are motherf---ing devils" while other family members suggested that the police shooting was unjustified.

Democratic nominee Hillary Clinton joined the chorus speaking out against the shooting of Keith Scott saying that he was "yet another name" that had made its way to social media of black men who have been killed at the hands of police. Her opponent, Donald Trump, was more reserved in passing judgment saying that he hoped the riots would end, peace would be restored and that the public would find out what had really happened.

The killing of Keith Scott had taken on strong racial overtones in recent days led by the protest group Black Lives Matter and bolstered by US media outlets who either buried the fact that the cop involved in the shooting was black — the New York Times placed it in paragraph 30, the Washington Post paragraph 31 — while other outlets did not mention it at all through a week of intense coverage such as MSNBC.

The protests immediately following the shooting death of Keith Scott got ugly with one black man being killed when a demonstrator shot him in the head while dozens were injured, including police officers, who had rocks thrown and other projectiles thrown at him. There were reports of looting of nearby stores and mob violence against some including a reporter who a group of demonstrators tried to stick into a burning fire.

Charlotte police explain in a statement that the officer, Brentley Vinson, believed his life was in danger when the suspect with a gun refused to lower his weapon after several demands. The officer remains on administrative leave awaiting further investigation of the shooting incident in accordance with Charlotte police policy.

The Charlotte-Mecklenburg Police Department did little to allay concerns over the transparency of the investigation process after quickly deleting tweets made during the Police Chief Kerr Putney's official statement that say the video fails to show evidence of a handgun in Scott's possession.

Black Lives Matter leader DeRay McKesson pointed to the deleted Tweets as a reason to suspect that the Charlotte Police story regarding the death of Keith Scott is false saying that in his opinion "the story ain't adding up."

​CMPD Chief Putney announced the video would be released about an hour before and said that the suspect was found with a gun and marijuana in his possession at the time of his death. The main tweet that was deleted by the Charlotte police says that the "videos show no definitive visual evidence" that Keith Scott had a gun, but that "Chief Putney says that other evidence from the scene proves it" suggesting that this is primarily the opinion of the commanding officer.

The video below is graphic showing the moment in which Keith Scott is first shot before falling off the screen. Scott was apparently walking backwards away from the police officers in what appears to be a non-threatening manner. The quality of the video makes it inconclusive whether or not Scott did have a gun in his hand.

With the release of the video around 6:45PM ET the Charlotte Police also released the following statement below asserting that Keith Scott raised his weapon prior to being fired upon and killed while suggesting that the deceased's history of narcotics may have played a role in the tragic incident.