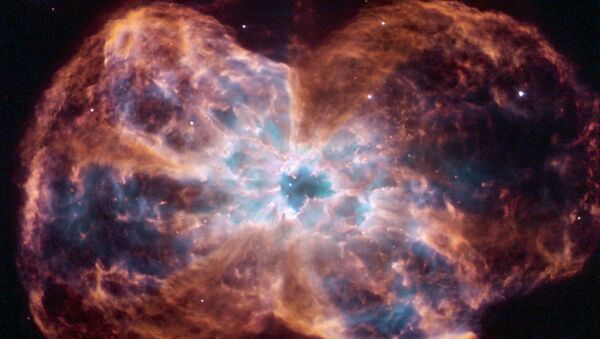 The NASA/ESA Hubble Space Telescope has released a colorful image of a demise of a Sun-like star.

The picture, posted Friday, shows the "last hurrah" of the white dwarf star. When dying, it casts off its outer layers of gas forming a cocoon around the remaining core. Glowing is caused by ultraviolet light. The white dot in the center is a burned-out star which is one of the hottest white dwarves in our galaxy with a surface temperature of over 360,000 degrees Fahrenheit.

These stellar relics, called planetary nebulae, litter the Milky Way Galaxy. The white dwarf is located at the center of NGC 2440 planetary nebula which lies about 4,000 light-years from Earth in the direction of the constellation Puppis, according to NASA.

The same fate awaits our Sun that will eventually burn out in another 5 billion years, NASA reports.

Reaching the end of their nuclear fuel, Sun-like stars swell into a red giant before losing their outer layers and turning into a white dwarf. Their core is usually composed of carbon and oxygen with some hydrogen and helium. Finding heavier elements like calcium, iron or aluminum in white dwarves raises a question of their origin.

Scientists Discover Real 'Star Wars' Between Dwarf Stars (VIDEO)
Last year, Kepler scientists came up with a theory that white dwarves gaining mass with heavier elements consume rocky planets or asteroids. Strong gravity of white dwarves can rip apart rocky bodies leading to the consumption of all their parts by the star.

Although further studies are required, this model could serve as an illustration of our solar system's fate. When the Sun turns into a red giant, it will probably consume Mercury, Venus and Earth, scientists believe.