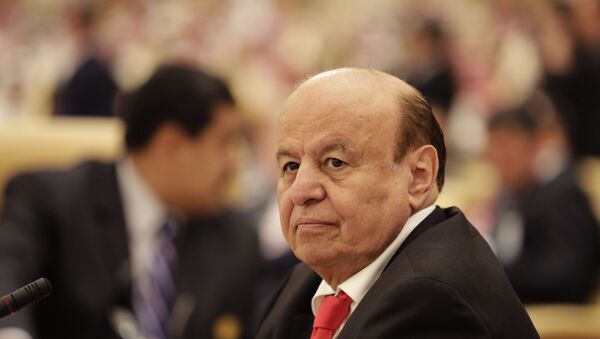 President Abd Rabbuh Mansour Hadi said that there will be no end to the conflict in Yemen until the rebel Houthi militias disarm.

Saudi Coalition Airstrikes in Western Yemen Kill Over 20 Civilians
WASHINGTON (Sputnik) – There will be no end to the conflict in Yemen until the rebel Houthi militias disarm, President Abd Rabbuh Mansour Hadi said in an address to the United Nations General Assembly on Friday.

"No peaceful solutions can compromise on the ending of the coup d'etat with all its consequences," Hadi stated. "We should first and foremost ensure the withdrawal of armed militias, surrender of weapons and control of agencies, and then complete the political process."

International financial support is necessary to rebuild the Yemeni economy after years of armed conflict and poverty, President said.

"We call for support from the free world and its monetary institutions in order to stand by us and respond to our economic measures in order to save the Yemeni economy and to deny the prospects of manipulating the future of Yemenis," Hadi stated.