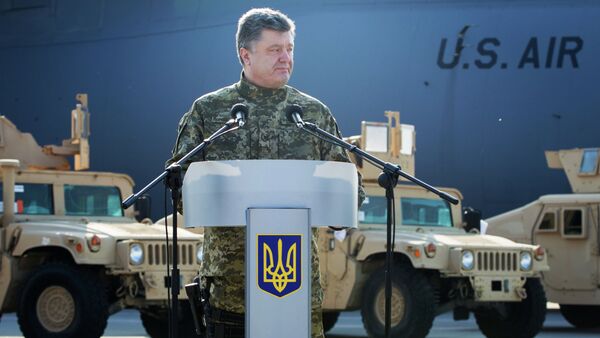 © Sputnik / Mikhail Palinchak
/
Go to the mediabank
Subscribe
International
India
Africa
On Thursday, the US House of Representatives approved a draft of the 'Stability and Democracy for Ukraine Act', which would allow lethal weapons to be delivered to the country. According to Russian experts, the question now is: will the Senate and the White House approve a bill which has the potential to reignite the civil war in eastern Ukraine?

Earlier this week, speaking with members of the Ukrainian-American community in New York, Ukrainian President Petro Poroshenko suggested that US-Ukrainian military cooperation over the past two-and-a-half years has demonstrated that Ukraine can be trusted with US lethal weaponry. Noting that Ukraine's "new professional army" does not conduct "wars of conquest," Poroshenko emphasized that Americans should feel it "absolutely safe to provide lethal weapons" to his country. "We will fight for our land to the last drop of blood," the president added.

World
Russia Concerned Over Possible US Supplies of Lethal Arms to Ukraine
On Thursday, Poroshenko's wish came one step closer to becoming a reality. The draft bill of the US House-approved Stability and Democracy for Ukraine Act provides for 'endless sanctions' against Russia, calling for the "full implementation of the Minsk agreements" (to which Russia is not even a party) and the "restoration of Ukrainian sovereignty over Crimea." Most significantly for Kiev, the bill also approves granting the provision of 'lethal defensive weapons' to Ukraine.

If approved by the Senate, the bill would land on President Barack Obama's desk for signature. Accordingly, Russian experts are asking whether the White House would really be irresponsible enough to take such a step, which could reignite the deadly civil war that has ravaged eastern Ukraine's Donetsk and Lugansk regions over the past two years.

Speaking to the independent online newspaper Svobodnaya Pressa, Dr. Mikhail Alexandrov, a senior expert at the Moscow State Institute of International Relations' Center for Military-Political Studies, suggested that Russia would have been naive to expect anything less from US lawmakers.

"From the outset, Western officials assumed that the Minsk agreements meant that Russia would quietly give up Donbass under the guise of implementing these agreements. This is precisely what they are demanding from us," the analyst noted. "Russia has a completely different understanding of Minsk, which includes a decentralized Ukraine, the creation of a real democracy, instead of the pro-Western one [which] engages in the violent suppression of all anti-Western forces."

OSCE Observers Detect Georgian Mercenaries in Eastern Ukraine - Press Release
Alexandrov explained that Russian authorities continue to hope that Minsk II could at least temporarily de-escalate the conflict, "freezing it for a certain period of time until the overall geopolitical situation in the world changes."

"However, I am convinced that Western countries will continue to play on Kiev's side, helping to keep the regime afloat via all sorts of handouts…And the small amounts of money required can always be found – it's not a problem."

Suggesting that much is riding on the November elections in the US, Alexandrov noted that "perhaps some new arrangements can be made if [Donald] Trump makes it into the White House. Otherwise, it will be necessary to take some radical decisions – to prevent any further attempts to use Ukraine as a strike force against Russia."

The analyst noted that if Washington does decide to supply lethal weapons to Ukraine, it will be a violation of the Minsk agreements, "since it will factually encourage Kiev to conduct combat operations. It would be the type of escalation against which Western countries have so strongly advocated against, at least verbally."

As for the bill's proposal to effectively sanction Russia indefinitely over Crimea, the analyst suggested that he can only welcome such measures. "I think that the more sanctions Western countries place on us, the better, since this cuts off the ability of any pro-Western elites in Russia to take the country in the wrong direction." Continued sanctions "would allow us to develop independently, and to build relationships with those countries which truly want to work with us…"

Sergei Markov, the director of the Moscow-based Institute of Political Studies, emphasized that Congress's decision was extremely dangerous, since it puts tens of thousands of lives at risk. "We shouldn't forget that lethal weapons have that name for a reason – their main purpose is to kill. For this reason, this is really a law promoting mass war crimes" in eastern Ukraine.

Reasons Behind France, Germany Adopting Russian Approach to Ukrainian Crisis
Fortunately, Markov suggested, President Obama is unlikely to sign the bill, "because he does not want to leave the Oval Office as a war president. Secondly, I think he is well aware of the ultimate futility of the adventurism of the coup in Ukraine. It was not his initiative to begin with – Vice President Joe Biden and the CIA were behind everything. Obama has long been trying to divorce himself from the subject of Ukraine."

Ultimately, the political scientist noted that Russia's position throughout the conflict in Eastern Ukraine has been too soft and diplomatic. Russian diplomats, in his view, need to emphasize that the government in Kiev has engaged in war crimes against its own population, and that providing it with lethal weapons would be a huge mistake.