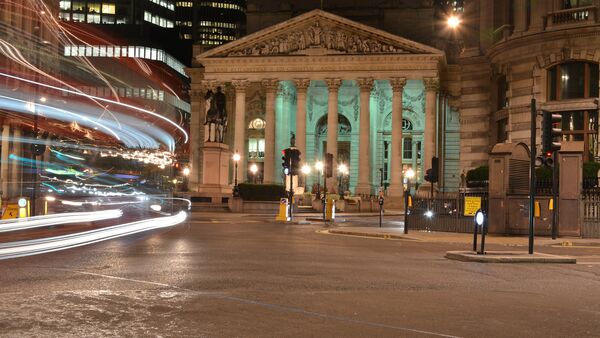 Given that the British economy outperformed earlier predictions during the past two months, monetary authorities are foregoing immediate further stimulus; they are holding off until they know what fiscal measures will be announced by the cabinet in November.

Kristian Rouz – Key policymaker at the Bank of England (BoE) said on Thursday that there is no use in introducing further stimulus in the current conditions, as the economy has outperformed earlier predictions, which were based on post-Brexit skepticism.

'BoE Asleep at the Wheel': UK ‘Sailing Blindly’ Into Second Financial Crisis
The claim draws support from the recent manufacturing report, with factory output rising and forward orders solidifying due to the plunge in the national currency, rendering national industries more competitive. With the BoE rates currently at their historic low of 0.25pc, zero interest rate policy (ZIRP) is unlikely to be implemented in the accelerating economy.

Kristin Forbes, one of the BoE’s top decision-makers, commented on monetary policy, having said that amid the prices and wages steadily advancing, and overall economic performance surpassing previous estimates, there is no need to add stimulus in any from, be that interest rate cuts or additional money liquidity injections. Forbes is a Monetary Policy Committee (MPC) member, and she supported last month’s trim in interest rates from 0.5pc to 0.25pc.

“The initial effect on the UK economy of the referendum has been less stormy than many expected,” she said during a public speech at Imperial College London. She also noted that the economy had been well-positioned pre-Brexit.

During the August MPC meeting, Forbes voted against the expansion of the BOE’s bond-buying program (quantitative easing) by an additional £60 bln as it was her belief that only a limited stimulus would have sufficed in the slightly troubled economic environment of early-to-mid-August. By now, the situation has surprisingly improved.

“There is some evidence that companies are delaying major investments – which could lead to weaker employment, wages, output, and productivity growth in the future. But these forces have been partially balanced by strong consumer spending. Net exports are also poised to pick up and provide some support to the economy,” Forbes said.

Indeed, the weaker sterling, trading at $1.30 now compared to its pre-Brexit yearly gauge of $1.42-1.60, has provided a substantial boost to national manufacturers, rendering imports more expensive, and thus also supporting gains in inflation. Weaker business investment is largely attributed to the still-lingering uncertainty, which is expected to gradually clear closer to the yearend.

Bank of England Keeps Rates Steady Amid Positive Macro Data
Last month, the BOE also introduced the Term Funding Scheme (TFS) that provides commercial banks with near-zero rate funds in order to ensure a proper monetary policy transmission to the final customer. In other words, the money injections are conditional, and the BOE wants to make sure that following their 0.25pc trim in base borrowing costs, the banks will also trim their interest rates by 0.25pc or more on credit lines they provide to their customers. That, in BOE’s opinion, would help intensify domestic lending, retail sales, homebuying, business activity and much more.

This might have worked, even though it is still a bit too early to judge thus far.

Forbes criticized the ultra-low interest rate policy, however, having said that “the costs of additional easing through asset purchases were greater than the benefits.”

She has a point – while the low interest rates benefit spenders and those in debt, savers are hurting, and wealth accumulation becomes redundant, if not retarded. However, it is wealth accumulation that ultimately drives economic growth, based on healthy business investment at home.
Now that the BoE has a notion of that, it is expected that further improvements in the economy would entail a hike in rates, particularly after the UK cabinet’s fiscal stimulus kicks in, which might happen as early as the second half of November.

“Looking forward, I am not yet convinced that additional monetary easing will be necessary to support the economy,” Forbes said. “Which way these winds blow will determine the appropriate stance of monetary policy in the future. For now, however, the economy is experiencing some chop, but no tsunami. The adverse winds could quickly pick up – and merit a stronger policy response. But recently they have shifted to a more favorable direction.”

Bank of England’s New Stimulus Heightens Struggle for Global Competitiveness
In the upcoming months, the BoE will be focusing on monitoring domestic consumption (as a key driver in the economy), business investment, prices index dynamics, and the labor market, particularly salaries and wages, and employment figures.

The MPC, however, are still considering a cut in rates to zero, as outlined in their minutes from this month’s meeting. If November’s macro figures remain “broadly consistent with August’s,” a majority of MPC members are likely to “support a further cut in the bank rate” before the yearend. This consideration might also be based off the fact that the government’s fiscal stimulus might be delayed until early next year.

Meanwhile, the UK’s manufacturing activity accelerated, and the factory owners’ three-month outlook is rather bright, as reported by the Confederation of British Industry (CBI). Amid a rise in export orders, output volumes, sustainable growth in output, gains in average factory-gate prices, and adequate demand for factory stockpile, the current dynamics should prevail over the next three months, which would further diminish a necessity for further rate cuts.