Nobody Expects the Spanish Inquisition! Aum Shinrikyo Banned in Russia 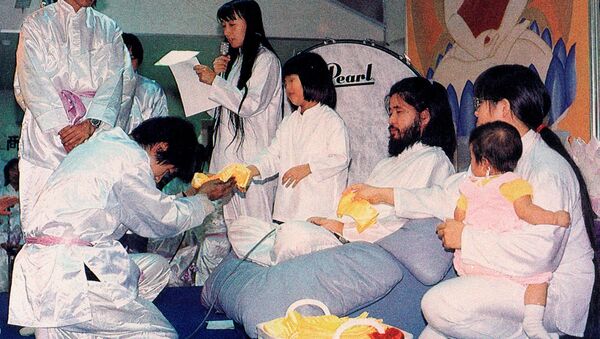 On September 20 the Supreme Court of Russia officially banned the Japanese doomsday cult Aum Shinrikyo, formally recognizing it as a terrorist organization.

The Sects of Serbia: Who is More Dangerous, Satanists or Jehovah's Witnesses?
The religious organization is now prohibited from conducting any kind of legal, business or advertising activity in Russia.

In April 2016 Russian authorities raided a number of properties in Moscow and St. Petersburg linked to Aum Shinrikyo. During the search of the premises the police discovered a significant amount of extremist literature and paraphernalia, along with a large number of SIM cards. The suspects however denied any affiliation with the Japanese cult and claimed that they’re merely yoga practitioners.

A month earlier Montenegro authorities also detained and deported scores of suspected Aum Shinrikyo followers, many of whom turned out to be Russian nationals.

The tactics used by Aum Shinrikyo appear strikingly similar to those employed by the Daesh (ISIL/ISIS) terrorist group: both organizations tend to brainwash their new recruits, strictly regulate the day-to-day activities of their members, while the will of the supreme leader of each movement is absolute.

Aum Shinrikyo first managed to establish its presence in Russia in 1992. The group’s leader, Shoko Asahara, spared no expenses in promoting his cause, spending up to $5 million on advertising Aum Shinrikyo in Russia.

Asahara and his cohorts actively met with Russian politicians, government officials and religious leaders, and established ties with scientific and education centers.

In the meantime, however, other Aum Shinrikyo members were quietly trying to bond with Russian military-industrial companies and displayed a somewhat peculiar interest in purchasing weapons.

By 1995 Aum Shinrkiyo had established 7 centers and commanded a virtual army of at least 30,000 adepts (though according to some estimated the total number of followers was as high as 50,000).

Then, on March 20, 1995 the cult members carried out the deadly Tokyo subway sarin attack, and everything came crashing down.

The Russian authorities, suddenly aware what kind of threat was lurking right in the heart of the country, came down on Aum Shinrikyo with a vengeance. However, the cult appeared to have been prepared for that contingency: even as police started carrying out searches at properties linked to Aum Shinrikyo, the Japanese members of the organization quickly fled the country, and a fire that suddenly broke out in the building of the Russian-Japanese foundation established by Asahara in Moscow destroyed the documents that would have shed light on the cult’s inner workings.

Due to this development, the court deemed the available evidence as insufficient, and despite a considerable number of testimonies condemning the activities of Aum Shinrikyo, chose not to officially ban the cult in Russia.

Alexander Dvorkin, president of the Association of Centres for the Study of Religions and Sects, told Sputnik that it’s far too early to claim that Aum Shinrikyo is finished, as blind faith and indoctrination can easily silence the voice of reason.

"No matter how culturally and economically advanced a country is, people are still people. When a person is stressed, he or she becomes more prone to suggestion. Sects prey on this, using various manipulation techniques to lure new acolytes," he remarked.

In July 2000, a group of young adherents to Asahara were arrested in Vladivostok. The suspects, who were in possession of weapons, explosive device components and a considerable sum of money, were allegedly plotting to commit terrorist attacks in Japan in order to liberate the incarcerated leader of Aum Shinrikyo. All of them were subsequently tried, found guilty and sent to prison.

And in 2003, Moscow was visited by none other than Fumihiro Joyu – one of the few senior members of Aum Shinrikyo who didn’t face serious charges, and who assumed the leadership of the organization and rebranded it as Aleph.

According to eyewitness reports, the Aleph leader visited one of the ATMAN yoga and Eastern esoteric practice centers and held a lengthy discussion, claiming that neither organization poses a threat to society.

However, Marina Zubritskaya, head of the ATMAN center in Moscow, told Sputnik that she can neither confirm nor deny any claims regarding possible ties between ATMAN and Aleph, as she has no knowledge of this issue.