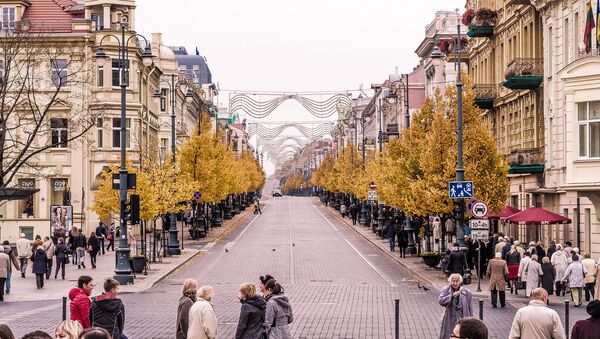 Speaking before Lithuania's parliament, the Seimas, during a security conference, Vosylius warned that Vilnius would not be able to prepare the planned 30,000-40,000-strong army reserve by 2021, as earlier planned. The officer emphasized that it would be impossible to build up the country's military if Lithuanians continue to immigrate en masse to Western Europe, without any plans to return.

Emphasizing that Lithuania must always be "mindful of the threat of Russian military intervention in our region," Vosylius suggested that the Kremlin is doing everything in its power to prevent Lithuanian nationals from returning home. This is being done to make it very easy for an "aggressive Moscow" to seize the Baltic states, he said.  "Trust me, Russia is using every means imaginable to prevent them from returning from the UK or Norway."

NATO to Deploy 4,000 Troops in Baltic Region by May 2017
The officer wouldn't clarify what these 'means' were, or how Moscow might influence foreign citizens, members of the European Union no less, to make any sort of decision about their place of residence. In any case, Vosylius suggested that now Vilnius's first order of business must be to improve relations with Poland, because at the moment, "in case of a military threat, the Poles may refuse to defend Lithuania."

Lithuania reinstated compulsory military service last year, following the downturn in relations between Russia and Western countries over the crisis in Ukraine. Prime Minister Algirdas Butkevicius has since acknowledged that the return of conscription has triggered a new round of emigration of military-age men abroad, but the government has refused to back down on the measure.

The country's new labor code, which will step into force next year, has also been blamed for encouraging emigration. The new law includes a significant reduction in the rights of workers, making it easier for employers to hire and fire, to limit hours, and reduce severance pay. Critics have suggested that the code is designed to increase the number of foreign workers working for a pittance in the country.

Baltic States' Agriculture, Fisheries Face Collapse After Loss of Russian Market
In April, Prime Minister Butkevicius said that forcing Lithuanians "not to leave, or to return to the country by means of coercion" was "impossible." However, he added, "a growing economy, the creation of jobs, and increased wages will allow us to bring back those who left, and to reduce the number of people wishing to emigrate."

But given the EU's ongoing economic stagnation, and the impact the Western-Russian sanctions war has had on the Baltics' agriculture and fisheries industries (Jean-Claude Juncker recently admitted that Lithuania had been hardest hit, with its GDP declining nearly 12% and its dairy industry on the verge of collapse), it's hard to imagine how the country might escape the present demographic crisis. 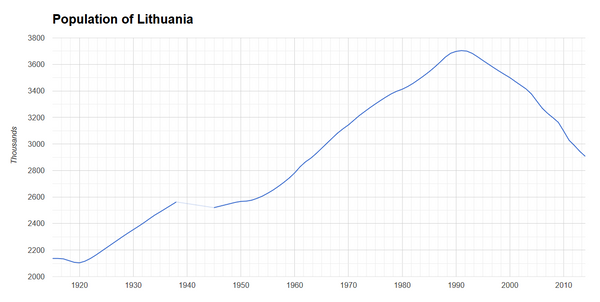 Graph of Lithuania's population, which has declined significantly since the early 1990s.
© Wikipedia / Postcrap