Love in the Jungle or Sex Tourism: Kinky Secrets of Refugee Helpers Exposed 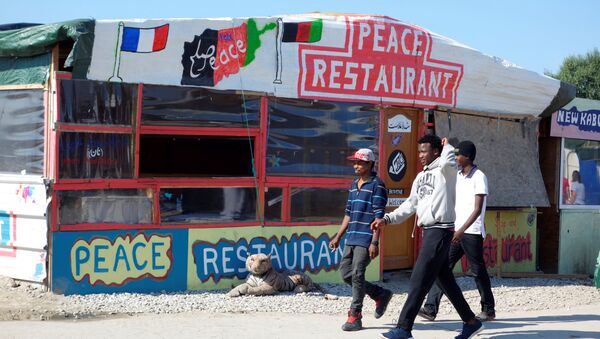 © REUTERS / Charles Platiau
Subscribe
Volunteers working at the infamous "Jungle" camp of refugees and migrants in the French port of Calais are having sexual relationships with migrants there, Maya Konforti, a volunteer for the "Auberge des migrants" organization, told Sputnik Francais.

Calais Camp Women Offer Sex in Return for UK Entry, Leaked Report Suggests
On Thursday the Independent newspaper reported that volunteers working at the so-called "Jungle" camp of migrants and refugees in Calais have been accused of "sexually exploiting" refugees living there.

According to the report, a male volunteer raised the alarm in a Facebook group, where volunteers discuss their work. He claimed to have heard of female volunteers having sex with adult male refugees and even boys under the age of consent. He also heard stories of male volunteers using prostitutes at the camp.

Charities working in the area told the Independent that they are aware of the problem, which is difficult for them to control. While they can fire a volunteer from their organization, they don't have the power to expel somebody from the camp. One-fifth of volunteers at the Jungle are not working for a charity.

The Facebook conversation, which has now been deleted, was started on the Calais People to People Solidarity Facebook page, which has more than 36,000 members.

Another aid worker accused some volunteers of behavior "pretty much no different to sex tourism," and treating the camp like a "free for all festival."

"If you're incapable of 'keeping it in your pants' then consider whether you ought to be there," they wrote.

Maya Konforti, a volunteer for the "Auberge des migrants" organization in Calais, told Sputnik Francais that her organization has a code of conduct which bans "any pattern of potentially exploitative sexual activity between associates and adult beneficiaries."

Konforti confirmed that sexual relationships between migrants and volunteers do happen, although she described them as "love stories."

"Our association gives recommendations, but at the same time real love stories can happen. There are two organizations active in Calais, Care4Calais and Auberge des migrants. They both have a code of conduct but a lot of independent people come to the camp who haven't signed it," Konforti explained.

Law of the Jungle: Calais Citizens Living on the Brink
The UN's Refugee Agency (UNHCR) has a code of conduct which states that sexual relationships between its staff and beneficiaries of assistance, "are based on inherently unequal power dynamics" and "are strongly discouraged."

However, Konforti argues that sexual relationships between volunteers and residents of the camp should be looked at in the same light as those outside it.

"There is no sexual abuse of refugees by the volunteers. This happens to all categories of people, this is not specific to refugees and volunteers. You could do the same survey in any area of London or Calais and see the same thing," said Konforti, who even knows of a case where a female volunteer took a Syrian refugee from the camp back with her to the UK.

"A volunteer and a Syrian fell in love, and now they are happily living in England," Konforti said.

Aid agencies estimate more than 9,000 people are living at the infamous "Jungle" camp, a makeshift settlement that sprang up at the French port of Calais in April 2015. Many of the refugees and migrants living there are from areas of conflict such as Syria, Afghanistan, and Eritrea, and also North Africa, and aim to cross the English Channel and claim asylum in the UK.

000000
Popular comments
sexual abuse by volunteers? This is a joke! These muslim male "refugees" totally don't mind having free sex with these willingly western $lut$. It's these kind of women who enshame the west of europe, and who encourage more male muslims to travel and enjoy these easy grab women.

md74
23 September 2016, 18:23 GMT
000000
We saw the same thing with Keith Vaz. This is rooted deeply in the pro-migrant pathology. Marxist agitators, gays and frumpy old boilers who should be home cooking dinner for the old man have been prowling the Calais Jungle for months doing this. Mass migration propaganda is a sham, a cloak for exploiting the migrants as a cheap source of labour and votes. To add sexual exploitation into the equation is an obvious further level of degeneration. In the latter case, the expolitation is mutual- the white helpers reduce the migrants to sexual objects while the migrants debase the volunteers. It's the kind of win-win progressives and globalists eveywhere see as the highest example of social evolution.