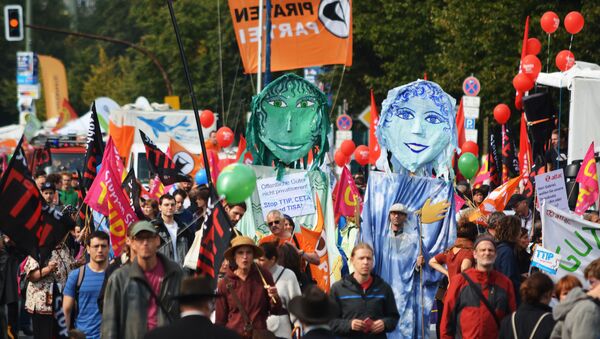 Opponents of three major trade deals between the European Union, the US and Canada are calling for the negotiations over Britain leaving the EU to be used to reject the deals, which have been derided as "toxic" and "outrageous," Sputnik has been told.

Heard about this thing called #ttip? Want to know what's in it? See our handy guide here: https://t.co/QZdyF2EHQL pic.twitter.com/dUP5caBOVQ

Opponents of all three say the deals will take away powers from EU member states and hand them to multinational companies, largely based in the US. TTIP has been heavily criticized for potentially lowering environmental, food safety and pharmaceutical regulatory standards.

All three trade deals have been criticized for being conducted behind closed doors, with little public debate, although there have been protests in some countries, notably Germany.

Campaign group Global Justice Now say Britain's exit from the EU should be used to reject all three trade deals. In a statement, it said there should be: "no toxic trade deals. The UK must reject TTIP, CETA and TiSA, deals that threaten our public services and lock in privatization while handing unprecedented power to corporations."

"Britain's constitution is being rewritten under our noses, without public debate, without an election. Even more worrying, is the damage being done to our values by a referendum that has divided the nation and stoked fear and hatred. This will have a profound effect on how our country behaves towards the rest of the world — on trade, on aid policies, on climate change," Nick Dearden, the director of Global Justice Now told Sputnik.

Central to the trade agreements is the principle that, if EU states' regulatory policies preclude non-EU countries from selling their goods or services, the company can sue for loss of earnings under the Investor State Dispute Settlement (ISDS) system, which is a trade tribunal separate form member states' judiciaries.

Dearden's comments were echoed by lawmakers in the European Parliament.

"The truth is the only beneficiaries of these deals will be the foreign investors who will gain the right to sue governments for enacting legitimate and democratic legislation. For citizens, our public services and our climate, these deals will be disastrous," Deputy Chairman of the Committee on International Trade and Green trade spokesperson Yannick Jadot said.

"Both the French Trade Minister and German Economy Minister have spoken out against TTIP and they must hold true to these statements and call for an end to negotiations. It simply does not make sense to denounce TTIP while still pushing ahead with a similar deal with Canada: CETA and TTIP are two sides of the same coin, and we must reject both."

​European United Left/Nordic Green Left MEP Anne-Marie Mineur, called on finance ministers meeting Friday, September 23, to discuss CETA to reject the agreement saying: "CETA will endanger the environment and give undue power to Canadian and US companies to sue governments and local authorities for adopting social and environmental regulations. To even consider provisional application of the agreement before national parliaments have had the chance to discuss this highly controversial agreement is outrageous."