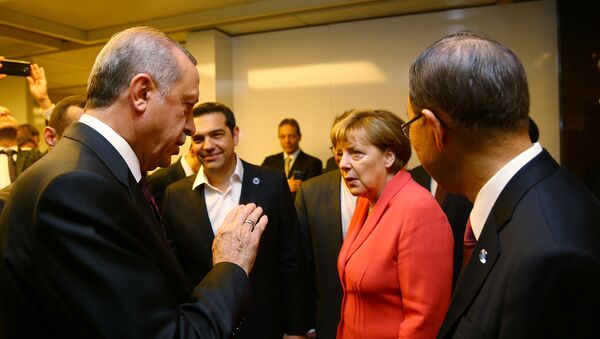 Greek Prime Minister Alexis Tsipras and Turkish President Recep Tayyip Erdogan held a meeting on the sidelines of the UN General Assembly in New York, during which they expressed their commitment to the implementation of the EU-Turkey agreement on refugees, Greek media reported.

Merkel: Decision on EU-Turkey Visa Regime May Be Reached in Upcoming Weeks
ATHENS (Sputnik) — According to Erdogan, the implementation of the agreement depends on the Greece-Turkey relations, and the efforts, taken by Ankara, have led to a drop in migrant outflow from Turkey from about 5,000-7,000 refugees per day in summer 2015 to about 150 now, the Athens News Agency said.

According to the media outlet, the two sides agreed that these efforts should be continued.

During the meeting, which took place on Wednesday, the Greek side said it supported Ankara over the issue of visas liberalization between the European Union and Turkey under the condition of implementation of all the criteria set by Brussels.

Ankara Reaffirms Commitment to EU-Turkey Migrant Deal - Mogherini
Europe is struggling to find a solution to a massive refugee crisis, with hundreds of thousands of refugees fleeing conflict-torn countries in the Middle East and North Africa. The EU border agency Frontex detected over 1.83 million illegal border crossings in 2015, in contrast to some 283,000 in 2014.