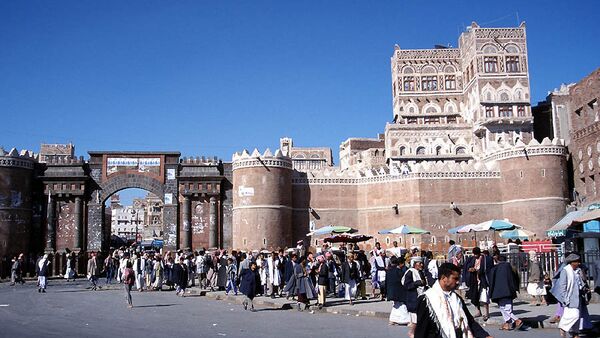 Ekaterina Blinova
All materialsWrite to the author
The Saudi-led coalition is not only killing civilians in Yemen but also erasing the country's extremely rich millennium-old historical heritage. However, the destruction of Yemen remains a story largely untold, Christine Bierre, Chief Editor of Nouvelle Solidarite, told Sputnik.

Despite Opposition, US Senate Votes to Greenlight Massive Arms Sale to Saudis
The war in Yemen is a story which is often neglected by news organizations, even though it is now into its second year.

In order to remove the Houthis, a Zaidi Shia group from power in Yemen, a coalition of ten states unleashed an all-out war against the Middle Eastern country back in March 2015.

The intervention has already resulted in more than 7-10 thousand Yemenis dead, 10-30 thousand wounded and more than 2 million displaced.

However, the most disturbing fact about the conflict is that the Saudi-led coalition's war is being waged with the West's — most notably the US, the UK and France's — tacit approval.

"As for the [Western] populations, they know nothing about Yemen's beautiful culture, and the fight appears as one between a pro-Saudi and a pro-Iranian group, and therefore they fear both," Christine Bierre, Chief Editor of Nouvelle Solidarite, the newspaper of the French political party Solidarite & Progres, noted in an interview with Sputnik.

Unauthorized Purposes: Is US Sending Saudis White Phosphorus for Yemen Attacks?
In her August article for the Schiller Institute think tank, Bierre turned the spotlight on the fact that the Saudi-led coalition is not only targeting Yemeni civilians, including elderly people, women and children, but is also wiping out their cultural memory by systematically destroying the rich cultural and historical legacy of Yemen.

She said that in June 2016 Herve Feron, a socialist deputy of the Department of Meurthe et Moselle in France, in collaboration with Anne Regourd, a researcher at France's National Center of Scientific Research, organized a colloquium at the Bourbon Palace, which brought together the best world specialists in the historical heritage of Yemen in the areas of architecture, archeology, manuscripts and music.

The experts drew attention to the fact that the Saudis are targeting areas and millennium-old structures which are of no military interest for the Coalition. Among them are three sites classified by UNESCO as World Heritage Sites: the old city of Sana'a, and the ancient cities of Zabid in western Yemen and of Shibam, dubbed "the Manhattan of the Desert," in the central desert of Yemen. 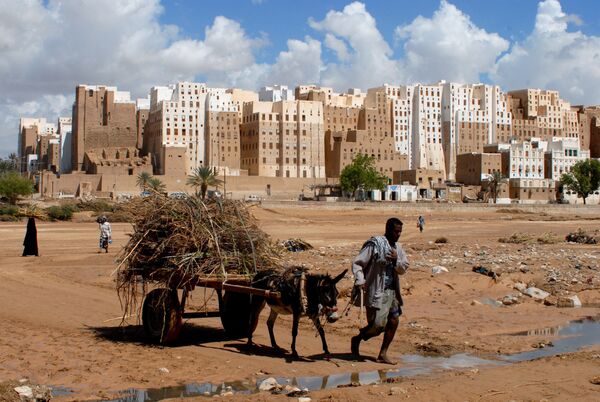 A Yemeni man pulls his donkey cart past the historical city of Shibam in Hadramaut province of eastern Yemen on October 28, 2008
© AFP 2022 / KHALED FAZAA

On the other hand, scientists raised the alarm regarding the Coalition's airstrikes threatening to eliminate unique Yemeni manuscripts, which, compared to other Muslim countries, are particularly rich in the areas of jurisprudence, dialectical theology, history, science and Koran exegeses.

Yemen's ordinary citizens are well aware of the importance of their cultural heritage and they are risking their lives to protect it.

In an interview with Sputnik, Christine Bierre bemoaned the fact that the issue remains largely neglected by both Western officials and mainstream media sources.

US-Made Bomb Used in August Attack on MSF Hospital in Yemen - Watchdog
But did the colloquium organized by M. Féron and Mrs. Anne Regourd in late June in France attract the attention of French authorities, political parties or parliamentary members?

"The fact that the sharp and well-grounded attack against the government came from a Socialist deputy, could not go unnoticed by the government and other political parties. The quality of the event was also high, because of the participation of respected scholars. But to my knowledge, besides my own, there was no coverage at all," Bierre told Sputnik.

She noted, however, that recently the brutality of the Saudi coalition attacks has apparently sparked concerns among Western policymakers.

"In the recent period, the brutality of the Saudi coalition attacks against the Houthi rebellion and against the cultural, historical and architectural millenary legacy of Yemen, have become a kind of embarrassment for at least two of the main Western partners of Saudi Arabia: the United States and France, unlike the British who are heavily arming and advising the Coalition," Bierre pointed out.

"In August, the US announced it had reduced its forces assigned to the 'Joint Combined Planning Cell', set up to coordinate US support for that war, which included air-to-air refueling coalition jets and limited intelligence sharing, to less than five servicemen, from a peak of 45," the French journalist underscored.

"As for France, no sooner had the war restarted on August 9th, that Foreign Affairs minister Jean Marc Ayrault, called on the warring factions to go back to the negotiation table and offered to play a mediating role with Saudi Arabia," she noted, adding that seemingly neither Washington nor Paris wants to be brought before the UN Human Rights Commission "for advising a war which is targeting children, hospitals, civilians and the ancient historical patrimony." 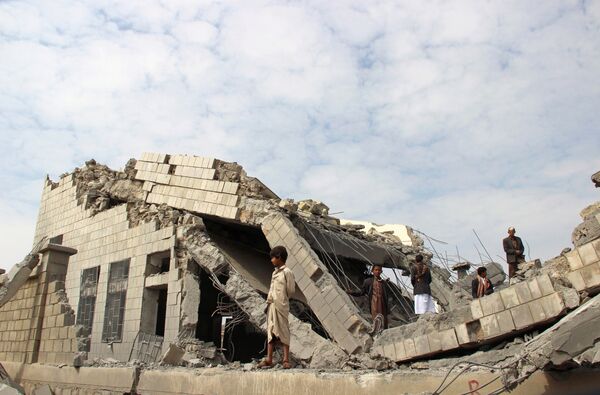 People stand on the rubble of a school destroyed by a Saudi-led air strike in an outskirt of the northwestern city of Saada, Yemen September 14, 2016
© REUTERS / Naif Rahma

'Islam That Did Not Oppose Faith to Reason'

The Saudi-led coalition has been spotted bombing Yemen's ancient cities and historical sites, which are of no military interest for the coalition. Is it a coincidence?

"It is not a coincidence at all," Bierre believes.

"The Saudis have been promoting for ages a radical form of Wahhabism which is totally hostile to the scientific and technological progress of humanity," she explained.

"And Yemen is a country where, as the wealth of manuscripts confirms, [flourished] a form of developed Islam which did not oppose faith to reason, but rather called on reason to better enlighten the teachings of the Koran. The Zaidite cult, which is part of the Shia cult, but also close to classical Sunni teachings is part of that," Bierre underscored, adding that Riyadh's Wahhabi clerics may seek to exterminate it.

Saudi Arabia Accused of 'Trying to Impose Wahhabism' on Iran via TV
There are also more prosaic reasons behind the Saudi intervention.

The Saudis are "furious about the reintegration of Iran into the world community by the US and panicked at a growing influence of Iran in Yemen, where they accuse the Houthi rebels of being armed by Iran."

In addition, "the Saudis want ensure control of the Gulf of Aden and the Gulf of Oman," Bierre emphasized.

The French journalist highlighted that the Saudi-led intervention is illegal, since it was not approved by the UN and called attention to the fact that the UN's role as an international arbiter is waning.

"Clearly, the UN's role as an arbiter has waned over the years, but in particular since the war against Gaddafi in Libya, in 2011, carried out under UN resolution 1973," she stressed.

Bierre recalled that the war against the Libyan government was unleashed by the US, Great Britain and France, and resulted in political and economic implosion, a civil and tribal war, a humanitarian and refugee crisis.

Looking at the war in Yemen, one may say that the lesson of Libya has not been learnt by the Western powers.