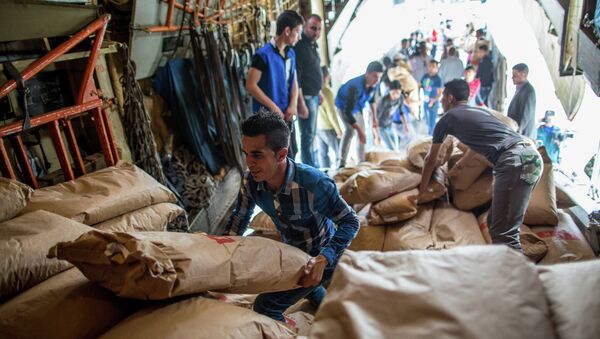 The Russian center for Syrian reconciliation, in cooperation with the Belarusian embassy, has delivered 23 tonnes (metric tons) of humanitarian aid to the Syrian city of Aleppo.

MOSCOW (Sputnik) – "Together with the Embassy of the Republic of Belarus two humanitarian actions were carried out in the city of Aleppo," the reconciliation center said in a statement posted by the Russian Defense Ministry.

According to the Russian military, aid was delivered to a university hospital, two clinics and a children’s home in Aleppo, as well as to a refugee camp in the Aleppo Province.

A UN-Syrian Arab Red Crescent convoy carrying humanitarian aid for Syria's Aleppo province was attacked late on Monday, according to the International Federation of Red Cross and Red Crescent Societies. As a result, 18 of 31 trucks were destroyed and at least 21 individuals were killed.

Russian, Belarusian Humanitarian Aid Delivered to Syria's Latakia
The tragic incident occurred amid a new ceasefire in Syria and just two days after aircraft of the US-led anti-Daesh coalition carried out four airstrikes against positions of the Syrian army near Deir ez-Zor, leaving 62 personnel killed and some 100 wounded.

Syria has been mired in civil war since 2011, with government forces loyal to President Bashar Assad fighting a number of opposition factions and extremist groups, such as Islamic State (ISIL, also known as Daesh) and Jabhat Fatah al Sham, both of which are banned in Russia and a range of other countries.