The Vogue of Plastic Surgery: Exploring the Unhealthy Obsession With Beauty 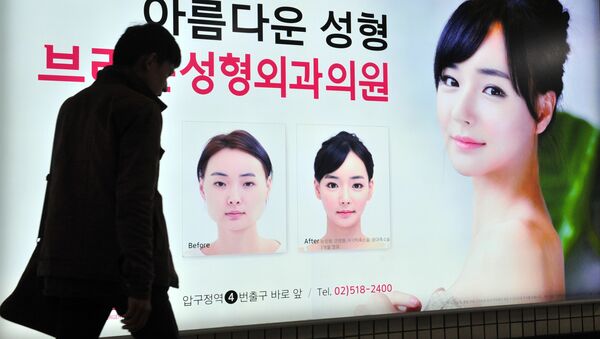 © AFP 2021 / JUNG YEON-JE
Subscribe
Today, a compulsion for plastic surgery is known as dysmorphic syndrome. Obsessed by today's beauty standards, people suffering from this syndrome pay too much attention to their appearance.

Collagen, silicone and botox have become part of people’s everyday lives. For example, Rodrigo Alves, a thirty-two year old Brazilian, has had more than 40 plastic operations to look like Ken, Barbie's (the doll) husband.

The systematic desire to improve one’s appearance has been called dysmorphic syndrome. In other words, it is a mental disorder characterized by an unhealthy obsession to change some aspects of one’s appearance. Approximately two percent of the world’s population suffers from this disease.

“People with body dysmorphic disorder inadequately perceive their appearance. In fact, they see themselves as incomplete, and thus try to change their appearance, add something pretty,” Alejandra Levy, a psychiatrist from Uruguay, told Sputnik.

Jocelyn Wildenstein, known as the Cat Woman, also suffered this mental disorder. The Swiss lady has undergone countless facial surgeries in order to look like a cat. According to her, she wanted to please her husband, as he was fascinated by big cats.

According to data provided by the International Society of Aesthetic Plastic Surgery (ISAPS), each year four million plastic surgery operations are performed in United States, while about 3.3 million are conducted in Brazil, followed by South Korea, India, Mexico, Germany, Colombia, France and Italy.

“Modern culture standards, where youth and beauty are seen as synonyms, inspire people to do plastic operations. In this case, people cannot deal with normal biological processes of age hardening. Preventing ‘grey hairs’ when it is simply inevitable. They live an illusion of being young their whole life. Often, this weird perception is fueled by the mass media,” Levi told Sputnik.

“Additionally, only wealthy people can afford such operations. They deny death and put youth above everything else,” the psychiatrist told Sputnik.

Today, 6,500 plastic surgeons work in United States. In Brazil there are 5,000 specialists and in China about 2,800 doctors who perform this type of surgery.