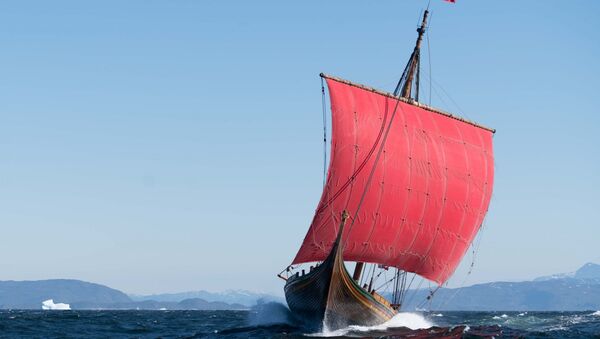 © Photo : Draken Harald Hårfagre
Subscribe
International
India
Africa
A five-month transatlantic journey on board the world's largest Viking ship ended in triumph, when the ship sailed into New York harbor. The modern-day Vikings, who embarked on a perilous journey in the footsteps of their great predecessor Leif Eriksson, had to endure adverse weather conditions, including ice and cold.

Ship Ahoy! Modern Vikings Set Sail for US in World's Largest Longship
The world's largest Viking ship, the Draken Harald Hårfagre started off in the Norwegian port of Haugesund in late April. It was named in honor of the legendary 10th century Norwegian king Harald Fairhair, who is revered for uniting Norway On their way, the 34-strong crew of ten nationalities passed the Shetland Islands, the Faroe Islands, Iceland, Greenland, Newfoundland and the Great Lakes before ultimately arriving in New York.

"Sailing in past the Statue of Liberty and coming in among thousands of people who had gathered in the harbor to clap their hands was an amazing feeling for the whole crew," the vessel's Swedish captain Björn Ahlander said, describing the moment to Swedish newspaper Sydsvenskan.

On their way, the crew had to battle a fair share of winds, ice and rain, like their Viking forefathers, but also enjoyed sunshine and even got to take pleasure in the wedding of one of its crew members in Greenland. Some of the waters around Greenland were particularly dangerous. Another challenge was to build up a special community spirit on the ship. Only 24 people could sleep in the tent while on board, therefore they had to take turns guarding and sleeping.

"The nights were especially tough, when we encountered icebergs and ice floes that can cause considerable damage to the ship. To notice them in time was certainly a challenge. But we just clenched our teeth and moved on, probably just like the real Vikings did," Ahlander said.

​The Dragon Harald Fairhair's hull is made of oak, and measures 35 meters (115 feet) from bow to stern. The ship is 8 meters wide (26 feet) and its mast is 24 meters tall (78 feet). It is propelled by a 260 square meter silk sail. With its impressive dimensions, The Dragon Harald Fairhair is easily the world's biggest longship built in modern times. Besides modern navigational tools, the longship is equipped with historical aids such as log lines, as well as magnetic and solar compasses. Its construction was sponsored by Norwegian businessman Sigurd Aase.

Leif Eriksson was a Norwegian Viking discovered North America in about 1000 AD, then dubbed Vinland, centuries before Christopher Columbus. Eriksson was the son of Erik the Red, who founded the first European settlement in Greenland.

We are pleased to announce the establishment of an official fundraising site with @drakenhh! https://t.co/lT5z80KpI3 pic.twitter.com/CfREF0MXuw