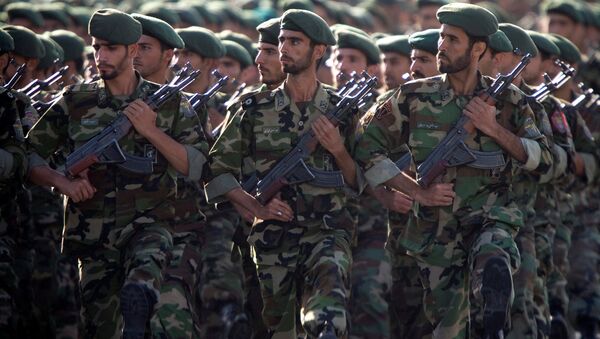 © REUTERS / MORTEZA NIKOUBAZL
Subscribe
The Iranian military has unveiled its latest missiles, accompanied by threats to use them against Israel.

On Wednesday, Iran conducted a military parade through its capital. On display were a wide variety of tanks and warplanes alongside troops.

But the parade also featured Tehran’s 16 ballistic missiles, as well as new projectile featuring multiple warheads, known as the Zolfaghar. According to a message written on the side of the truck transporting this missile, the Zolfaghar is intended for Israel.

"If the leaders of the Zionist regime make one false move, the Islamic republic will turn Tel Aviv and Haifa to dust," it said, according to the Jerusalem Post.

According to General Amir-Ali Hadjizadeh, commander of the air wing of Iran’s Revolutionary Guards, the missile has a range of approximately 466 miles. Given that it’s roughly 764 miles from Tel Aviv to the Iranian border, it’s hard to know what to make of the threat.

"The recent decision of the American criminals to give military aid to the usurper Zionist regime reinforces our determination to increase our defense capabilities," said General Mohammad Hossein Bagheri, chief of staff of Iran’s armed forces, according to the Times of Israel.

Earlier this month, the US signed a record $38 billion military aid package for Israel that will be doled out over the next ten years.

"The ultimate objective of the United States, the Zionist regime and those who support terrorist groups…is to destroy the infrastructure of Syria and Iraq in favor [of Israel]," Bagheri added.

Tensions have also been inflamed by recent standoffs between the Revolutionary Guard and US Navy ships in the Persian Gulf.

"We tell the Americans that it’s better that the capital and wealth of the American people should not be wasted on their inappropriate and detrimental presence in the Persian Gulf," said Major General Mohammad Ali Jafari, commander of the Revolutionary Guard, according to the Jerusalem Post.

000000
Popular comments
It means that hezbollah already has it in its inventory. Good.