Kindred Spirits: The Similar Fates of Iran and Cuba 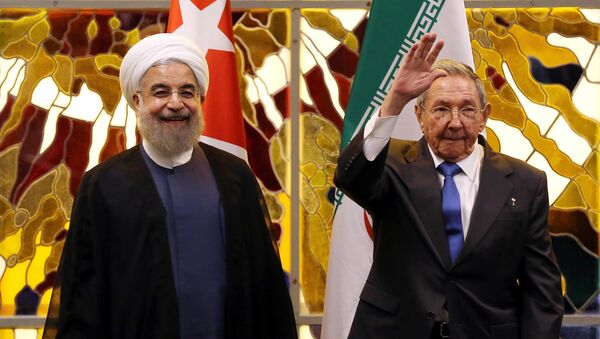 Obama Administration Open to Consider Renewal of Iran Sanctions Act
During his official week-long tour across Latin America, Iranian Foreign Minister Mohammad Javad Zarif visited Cuba, accompanied by a retinue of some 120 people, nearly half of whom were businessmen. During his visit, the minister and his Cuban colleagues discussed cooperation in a variety of areas, including the prospects of shipping Iranian oil to the island and establishing deep sea oil rigs in the Gulf of Mexico.

On his September sojourn to the UN General Assembly session, Iranian President Hassan Rouhani also paid a visit to Cuba where he met with the republic’s founder and former president Fidel Castro, and his younger brother, President Raul Castro. During the visit, the Cuban and Iranian leaders signed agreements for collaboration in the health, education and science sectors, as well as a memorandum of understanding on banking, and promised to open a new chapter in the bilateral relations between Iran and Cuba.

Vladimir Sazhin, political analyst and senior expert at the Russian Academy of Sciences' Institute of Middle Eastern Studies, told Sputnik that while at first glance Iran and Cuba, two nations located in different corners of the world, have little in common, they also share one distinct trait.

"History, religion, ethnic composition of the populace, state structure and ideology of Iran and Cuba are practically devoid of similarities. However, if one were to recall the recent history of the two nations, it immediately becomes apparent that they do share one trait – revolutionism," he explained.

In 1959 Cuban revolutionaries led by Fidel Castro managed to overthrow the pro-US dictator Fulgencio Batista and take control of the country, prompting the outraged United States to sever diplomatic relations with Cuba and impose a strict sanctions policy against which lasted for 55 years.

Two decades after that event the Iranian Islamic revolutionaries led by Ayatollah Khomeini overthrew the Persian monarchy and ousted the pro-American Shah Reza Pahlavi, eliciting a similar reaction from the US – the severance of diplomatic ties and strict sanctions.

"This is the commonality of Iran and Cuba’s fates – of two nations that for decades were engaged in political, financial and sometimes even military confrontation with the United States," Sazhin remarked.

In the years that followed the Iranian revolution, Tehran and Cuba enjoyed cordial bilateral relations, further bolstered by their joint membership in the Non-Aligned Movement. Now however, it appears that Iranian-Cuban relations are moving to a whole new level due to a number of factors.

"First and foremost, it’s caused by the changes in the political and diplomatic situation in Cuba and Iran, and the improvement in their relations (albeit to a different degree) with their chief antagonist — United States," Sazhin said.

He pointed out that while Havana and Washington already restored bilateral diplomatic relations, Tehran appears reluctant to make a similar move even despite the successful nuclear deal. And while both the government of President Rouhani and Barack Obama’s administration continue to send positive signals in that regard, one shouldn’t forget that there are influential forces in both countries opposed to the normalization of Iranian-American relations.

"At the same time, one cannot dismiss the current Iranian-Cuban trend of overcoming their historical enmity with the US and putting an end to their isolation, which creates favorable conditions for expanding and improving their bilateral ties based on common historical experience. Cuban Minister of Foreign Trade and Investment Rodrigo Malmierca Diaz himself said that Iran and Cuba share the experience of living under sanctions and should use it as a roadmap," Sazhin said.

Despite the ongoing thaw in relations, the US is yet to fully lift the sanctions imposed against Cuba and Iran. Therefore, the political and economic rapprochement would help Tehran and Havana to jointly advance their interests and coordinate their efforts aimed at getting rid of embargoes, sanctions and other prohibitive measures imposed against them.