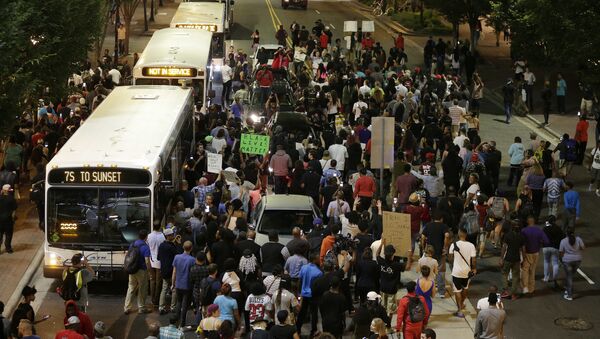 Violence erupted in Charlotte, North Carolina for the second night as demonstrators gathered to protest police brutality, resulting in the shooting of one of the protesters.

Protesters were gathered outside the Omni Hotel in downtown Charlotte when shots rang out. One individual was rushed to an area hospital with a life-threatening wound. Police Chief Kerr Putney later told Fox News that the individual died from the injury, a statement the cops later retracted.  That victim remained on life support late Wednesday night.

City officials say the shooting was the result of civilian-on-civilian crime.

Authorities fired tear gas to disperse the crowd and a number of demonstrators were arrested.

At least 12 police officers were injured on Tuesday night as demonstrators took to the streets to protest the shooting death of Keith Scott.