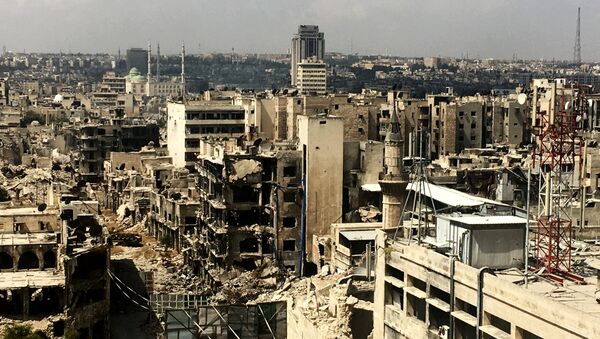 © Sputnik / Mikhail Alayeddin
/
Go to the photo bank
Subscribe
The peace process in Syria has a chance of being restarted, according to Vladimir Sotnikov of the Moscow-based Institute of World Economy and International Relations. The US Air Force's recent attack on Syrian government troops and the hesitance of a number of Syrian opposition groups have called the recently-established ceasefire into question.

Seeking the Way Out: Syria's Decentralization Not a Panacea
Restarting the peace process in Syria remains possible despite the resistance of a number of opposition groups and the US Air Force's recent attack on Syrian government troops, Vladimir Sotnikov of the Moscow-based Institute of World Economy and International Relations, was quoted by RIA Novosti as saying.

He said that with the Russia-US agreement on Syria coming into force, prospects for the launching of the reconciliation process have significantly improved and are still there.

At the same time, Sotnikov recalled that the situation on all fronts of the civil conflict remains tense and that it will depend on the actions of other regional players.

"First of all, we should mention Turkey, which is conducting its own military operation, which Turkish authorities said is aimed against Daesh terrorists.Given that in a large number of major external players, including Moscow and Washington, are involved in this war, chances [for peace process] remain," he said.

US Coalition Strike on Syrian Army: 'Revenge of the War Hawks' Amid Ceasefire
According to him, the chances for a lasting truce mainly depend on the Syrian army's success "on the ground", and on whether the participants of the internal conflict are ready for a political dialogue.

Sotnikov said that he is "quite optimistic" about the restart of this process, which he suggested may take place following the swearing-in of the next US President.

"Importantly, Moscow is doing its best to re-launch the peace process and as I understand it, our American partners want the same. So chances remain but much will depend on the situation in Syria," he said.

He praised the political will of Damascus, which is highly interested in the normalization of the situation in the country, something that is regrettably not the case with the Syrian opposition groups, which are still at odds over several key issues.

"The truce process is of paramount importance to the  government of Bashar Assad, while the so-called moderate opposition groups remain at loggerheads over the matter," according to Sotnikov.

"As for the Free Syrian Army and the Syrian High Negotiating Committee, they should make more efforts to add to the ceasefire process. They have their own stance on the matter, namely, they still oppose Assad's government and pursue their own interests," he said, adding that these groups are supported by influential international players.

"In addition to the attempts made by Moscow and Washington, much will depend on how actively local actors will add to the peace process," he added.

The incident marked the first time that the US-led coalition has directly attacked the country's government. Washington insists that the attack was unintentional and that it was carried out by mistake.

What’s Behind the Failure of Russia-US Ceasefire Agreement in Syria
On September 19, the Syrian Army's High Command announced the expiration of the ceasefire in the country, a week after the package of Russian-American agreements on Syria entered force.

Earlier, the Russian Defense Ministry said that the truce was only being observed by the Syrian government troops, while militants had repeatedly violated the ceasefire.

The Syrian Armed Forces' High Command, for its part, stressed that Syrian troops have made every effort to comply with the ceasefire and "showed the highest degree of endurance in confronting abuses by terrorist groups."