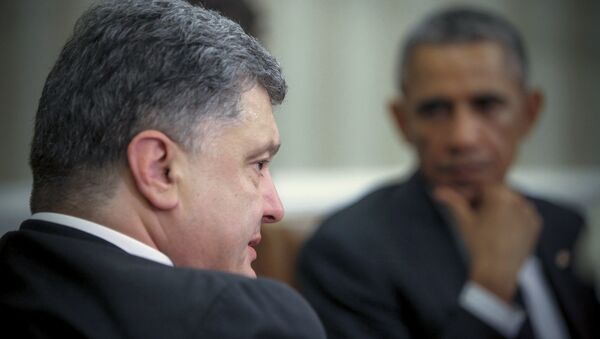 © Sputnik / Mikhail Palinchak
/
Go to the photo bank
Subscribe
Poroshenko has discussed the implementation of the Minsk peace agreements with Obama.

KIEV (Sputnik) – Ukrainian President Petro Poroshenko has discussed the implementation of the Minsk peace agreements with US President Barack Obama, a statement on the Ukrainian presidential website says.

Obama and Poroshenko also discussed the reform progress in Ukraine, according to the presidential release.

Ukrainian President Poroshenko Says to Meet With Obama Next Week at UN GA
Kiev launched a special military operation in Ukraine’s southeast (Donbass) in April 2014, after local residents refused to recognize the new Ukrainian authorities, which came to power as a result of a coup.

In February 2015, a peace agreement was signed between Ukraine’s conflicting sides in the Belarusian capital, Minsk. Despite the fact that the deal stipulated a full ceasefire in Donbass, violations both on the part of Kiev forces and local militia have been reported. Kiev has also been reluctant to implement the political provisions of the deal.

Ukraine heavily relies on foreign aid to support its economy and to pay its debts amid the ongoing armed conflict with independence supporters in Donbass.

In March 2015, Ukraine received the first tranche worth $5 billion followed by the second tranche of $1.7 billion in August of the same year.

Earlier this month, the IMF executive board approved a new $1-billion tranche to Ukraine. The amount of the aid had been reduced from the originally planned $1.7 billion.