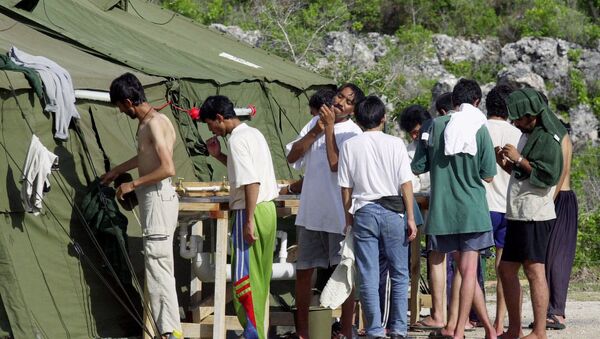 "This remote processing model is able to take away the benefit being offered by people smugglers, reduce or eliminate deaths at sea and ensure that states can control their borders… And at the same time ensure that people in need are granted protection," Waqa said on Tuesday speaking about the country's refugee policy and its cooperation with Australia, as quoted by the ABC broadcaster.

At the same time, the president called for help in providing more than 900 refugees, which were on Nauru at that moment, with homes.

'Doomed to Fail': Why EU's Plan B on Migrants is Tackling the Wrong Problem
Australia detains refugees who come to the country to seek asylum in offshore detention camps on the Manus Island in Papua New Guinea and Nauru in the South Pacific, while their application is being processed by Canberra. Australia's policy in regard to refugees has been repeatedly criticized by different rights groups

The Nauru facility was opened in 2001 and ran until 2008. In 2012, it was reopened following a surge in the number of maritime arrivals of asylum seekers. The center has been in focus of a scandal since August after The Guardian published over 2,000 leaked files documenting large-scale abuse, particularly of children, at the facility.