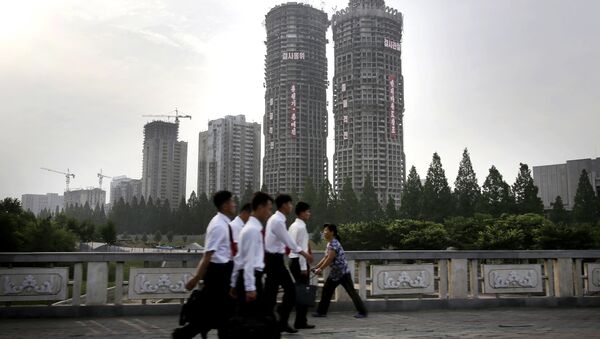 Party Like You're in Pyongyang: North Korea Invents Hangover-Free Alcohol
North Korea has taken steps to improve its economy and a middle class is beginning to emerge despite sanctions, Professor Andrey Lankov of Kookmin University in Seoul told Sputnik Japan.

On Monday the Foreign Ministers of the US, Japan and South Korea met in New York, where the UN General Assembly took place last week, and agreed a joint statement condemning North Korea's nuclear testing.

Pyongyang conducted its latest nuclear test on September 9, reportedly the biggest yet. After the response by the US, Japan and South Korea, a joint call for countries to effectively implement sanctions against North Korea, Pyongyang responded with an announcement that it had carried out a "successful" ground test of a new rocket engine to launch satellites.

Professor Andrey Lankov, an expert in Korean affairs at Seoul's Kookmin University, told Sputnik Japan that while developing the country's military capabilities has led to international sanctions, Kim Jong-un has carried out some market-oriented reforms that have allowed a North Korean middle class to prosper.

Lankov said that "North Korea is still a poor country by any standards," and data Pyongyang reports to the UN shows that one-quarter of the population doesn't have enough food during spring. However, Pyongyang may exaggerate its reporting of economic difficulties in order to receive more international aid.

"Whether that's true or not, there isn't famine, and there is even some economic growth. Changes are taking place and while there is not word of reform, only agricultural reform, they are visible," Lankov said.

China Against Unilateral Sanctions Against North Korea
"The reforms are working, life is getting better and there are already a lot of private cars in the country. There are even traffic jams in Pyongyang sometimes, and there is a construction boom everywhere. As a result, property prices are rising. Elite apartments in Pyongyang can cost up to $200,000, although that's an exception. A nice apartment in the North Korean capital costs $70-$90,000."

"There are rumors, I have heard them from too many different people to ignore them, that Kim Jong-un has given a secret instruction not to ask questions about the origin of funds if someone is planning to invest large sums in an apartment or business."

"We have noted that Kim Jong-un has not issued any law or regulation prohibiting private business. This is a commercial 'gray area' which began to flourish when the new leader came to power, though officially it doesn't exist," Lankov explained.

The country's burgeoning middle class is the beneficiary of the reforms implemented by the North Korean leader since he succeeded his father as leader in 2011. However, their good fortune could still be cut short by the authorities.

"The North Korean middle class is doing great. They live well and eat in private restaurants, they have apartments and there is apparently even an unwritten rule not to touch them. However, all their possessions could be confiscated at any time, they could be arrested, because the unwritten rule is still unwritten," Lankov said.

The economic improvements come despite international sanctions in response to Pyongyang's nuclear testing. These include the freezing of financial assets, an arms embargo, export ban and inspection of all cargo entering and leaving the country.

The country has been subjected to five sets of UN sanctions since it conducted its first nuclear test in 2006, and the latest set was announced by the UN Security Council in March, following a nuclear test in March this year.

North Korea Could Be in Possession of 20 Nuclear Bombs by Year’s End
On September 9 North Korea announced it had successfully tested a nuclear warhead in its fifth nuclear test, conducted on the country's National Day.

South Korea estimated the test to be Pyongyang's biggest-ever, with a yield equivalent to ten kilotons of TNT.

"Our… party sent a congratulatory message to our nuclear scientists… for conducting the successful nuclear warhead explosion test," she said.