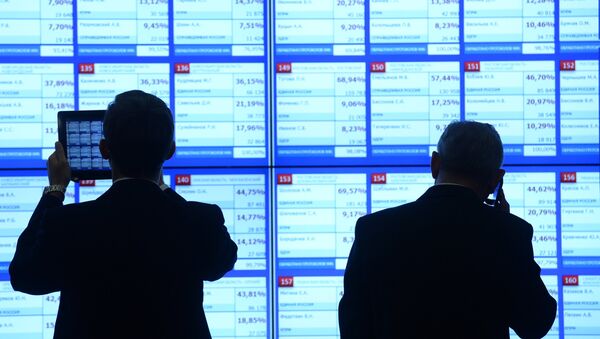 © Sputnik / Kirill Kallinikov
/
Go to the mediabank
Subscribe
International
India
Africa
Ukraine's legislators denounced on Tuesday the results of the Sunday elections to the Russian State Duma, the parliament's lower chamber, as illegitimate by adopting a corresponding decree with a vote of 264 to one, with one abstention.

KIEV (Sputnik) — The decision was Kiev's response to the participation of its former region of Crimea, which reunified with Russia after a 2014 referendum, in the Russian parliamentary elections.

Entrance to Russian Embassy in Kiev Unblocked After 3 Men Try to Derail Voting
The Ukrainian legislators expressed intention to urge the UN Security Council and the General Assembly as well as foreign parliaments not to recognize the Russian parliamentary elections.

Crimea, which on Sunday took part in the Russian parliamentary election for the first time, reunified with Russia after over 96 percent of the local population supported the move in a 2014 referendum following the coup in Kiev that toppled former President Viktor Yanukovych. Ukraine, as well as the West, did not recognize the move.