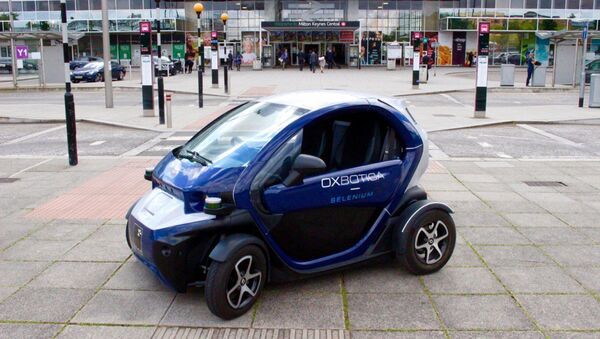 © Photo : Oxbotica Contacts
Subscribe
A committee drawn from one of Britain's oldest institutions is to investigate the future of driverless cars in the UK.

The House of Lords Science and Tech Committee will collect evidence on how useful driverless cars could be, not only on Britain's roads, but also in UK's farming sector and space exploration.

Spelling out the committee's intentions, Lord Selbourne added: "We will examine what the Government is doing to support research into developing autonomous vehicles in the UK, as well as the real-world implications as these vehicles start to appear on the roads and in the work place."

However, can Britain post Brexit become a fierce contender to Silicon Valley and end up in poll position of the driverless car race?

​"If the UK is to be at the forefront of this transport revolution, investment into research is vital to ensure the technology is perfected, allowing the public to embrace the use of autonomous vehicles," Lord Selborne said, with reasonable skepticism ahead of the launch of the Lords inquiry.

"There are potentially considerable economic opportunities and public good benefits from this technology," he added.

There are also potential pit-falls — or pit-stops too.

​The British government is currently investigating what changes to car insurance, road tax and traffic laws would be necessary to accommodate driverless cars on Britain's future highways.

According to recent survey carried out law firm Pinsent Masons, 80 percent of respondents thought that the British government needs to change current laws pretty swiftly — or even urgently if it is to be able to sufficiently test out driverless cars.

US car maker Ford has joined German bigwig BMW in promising the first entirely autonomous vehicle on the road by 2021. Volvo, Mercedes-Benz and Audi are also busy working away on driverless technologies — but haven't yet announced a launch date.

Silicon Valley giant, Google may have been in poll position in the technological development of driverless cars — but it lacks the access to and experience of vehicle assembly lines.

As for bridging the gap between the software required to make established car models autonomous, Britain may have the answer. Oxbotica, a spin out company from the University of Oxford has developed a new software system for making regular cars into driverless vehicles.

​Its system, called Selenium absorbs data from cameras, scanners, and sensor and radar systems to build a series of algorithms to enable the car to establish what surrounds it and inform it on how to move.

"It takes any vehicle and makes it into an autonomous vehicle," Paul Newman, professor at the University of Oxford and co-founder of Oxbotica told Technology Review.

The race to poll position of self-driving car technology is still on, the question now, is will the House of Lords Science and Tech Committee be able to keep up?