© Greenpeace
Subscribe
International
India
Africa
The top secret Trade in Services Agreement (TiSA), currently being negotiated behind closed doors by 50 countries around the world, would put last year's Paris climate change deal in a "straight jacket" and play into the hands of big business, critics have said following the release of fresh leaks.

Following the release of leaked material from intergovernmental meetings in June, opponents of the proposed TiSA trade deal say it would conflict with existing global climate change commitments, undermine the rights of national governments and give unprecedented power to multinational corporations.

Among the leaked documents released by Greenpeace Netherlands, concerns have been raised over a proposed annex on "energy and mining related services", which critics believe could give greater power to energy companies and free up restrictions on the exploration of fossil fuels.

Leaks from inside the secretive TiSA negotiations have emerged, revealing new threats to our climate. https://t.co/SKJUsfxvl5 #TiSAleaks

​Opponents of TiSA fear any such annexes would counter international commitments aimed at phasing out fossil fuels, such as those negotiated by national governments last December at the UN climate change summit in Paris. 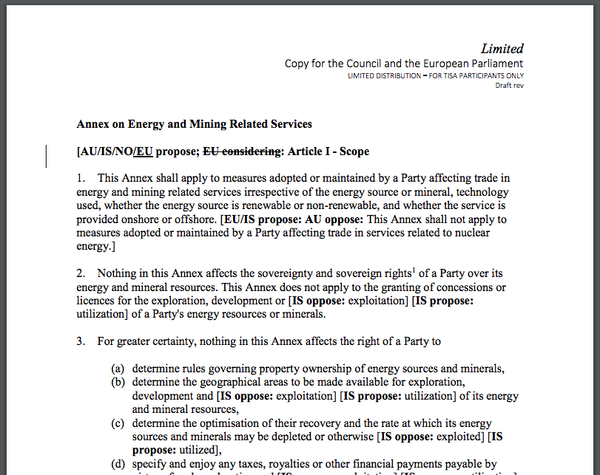 Leaked documents relating to negotiations of the Trade in Services Agreement (TiSA), released by Greenpeace. Opponents are concerned about the environmental impacts of any potential annex on energy and mining services.
© Greenpeace

"Its energy annex is not especially clear, with the term 'services related to' vague enough to cover any number of actions and phrases like 'market distortion' likely to kick-off a range of interpretations," a Greenpeace NL analysis of the leaked documents said.

"What is clear, however, beyond any specifics to do with ratchet and standstill clauses or necessity tests, is that there is a risk that TiSA could be used to take and support actions that go against the global climate agreement signed in Paris."

The TiSA leaks have also raised concerns about the undermining of national governments and increase in power given to multinational corporations under controversial clauses.

​"The standstill clause freezes the extent of liberalization in certain sectors, which means the markets of TiSA state can never be less liberalized than they were at the time they signed the deal," Greenpeace said.

"Meanwhile the ratchet clause — which sometimes appears in other trade agreements — stops countries from reintroducing trade barriers that had been previously and unilaterally removed.

​"Together these two clauses undermine the ability of governments to ever reverse the liberalization of services, even if elected on a mandate to do it."

"Google and Facebook should not determine privacy rights, banks should not regulate banks and having the fossil fuel industry involved in environmental policy is as senseless as the tobacco industry having a say in health policy. Let those decisions be made by the people via the governments they elect," Greenpeace spokesperson Susan Cohen Jehoram said.

While TTIP and the TPP focus on all parts of trade, TiSA strictly focuses on the service industry and is being negotiated by 50 countries worldwide, including the EU, US, Japan, Canada and Australia.

​While proponents of TiSA and other agreements say the deals will lower international trade barriers and promote more international growth, critics argue the agreements will ultimately wash away workers' rights, undermine environmental targets, challenge the sovereignty of national governments and give unprecedented power to multinational corporations.

Concerns have also been raised at the nature of discussions, which have been carried out in secret by national leaders and government representatives, leading to questions over transparency. 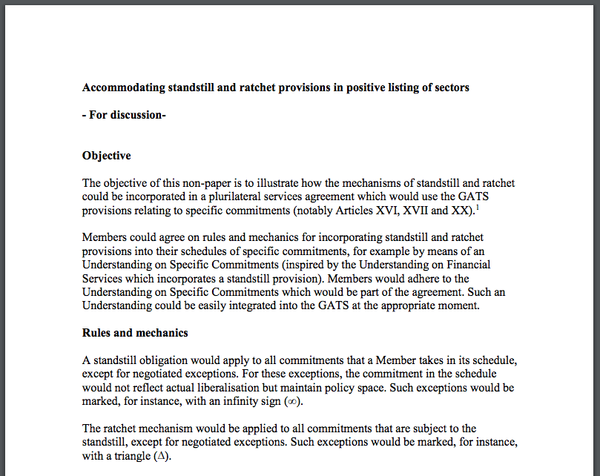 Leaked documents relating to negotiations of the Trade in Services Agreement (TiSA), released by Greenpeace.
© Greenpeace

"It's a sad day for democracy when ordinary people are dependent on leaks to learn about the far-reaching consequences of toxic trade deals that are being cooked up behind closed doors," said Nick Dearden, director of the UK-based campaign group Global Justice Now.

"These leaks confirm what civil society groups, trade unions and consumer watchdogs across the world have been warning against, that TiSA is a turbo-charged privatization and deregulation deal that will enormously benefit corporations at the expense of ordinary people and democracy itself."

TiSA is still being negotiated by national leaders, however government officials are bound from commenting on the nature of the agreement until talks have been completed.