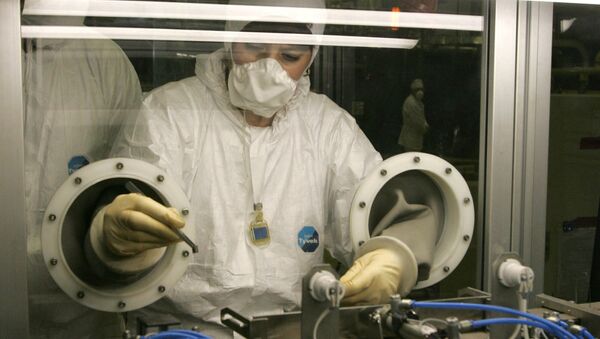 MOSCOW (Sputnik) — Russia's leadership in the global production of inexpensive enriched uranium for nuclear power plants is based on a technology that was developed in the mid-20th century. The modern gas centrifuge method for uranium enrichment requires no more than 2% of the energy consumed by the previously used diffusion method.

Russia’s MEPhI Committed to Expanding Nuclear Education Program
At present, the cost of Russian uranium is dramatically lower than the equivalent US fuel. However, to stay ahead, we constantly need to improve the technology, the scientists note.

The team at the MEPhI Molecular Physics Department has derived a formula that describes the separative power of a centrifuge that is optimized for a variety of parameters. It is a simplified model – the concurrent centrifuge with a direct gas flow (the gas flows in on one side and flows out on the other).

Every Scientist Should Know What Impact Factor Is - MEPhI Expert
Until recently, scientists had only published experimental information obtained for Russian 0.5 meter countercurrent gas centrifuges. They struggled to find a theoretical basis for the available experimental results. Even worse, these results were directly contrary to theoretical approaches.

The formula for a simple concurrent centrifuge of arbitrary length and an arbitrary binary mixture will help professionals understand what measurements must be taken to develop the most effective devices, said MEPhI Molecular Physics Department professor, Sergei Bogovalov.

According to Bogovalov, the resulting formula is applicable to natural gas stripping in centrifugal fields with large amounts of gas pumped through. The results were published in the leading scientific journal, Nuclear Engineering and Technology.

“It became clear why the separative power increased as a velocity squared, not velocity to the fourth power, which follows from simple parameters. The formula tells us how we can influence the design to change this correlation,” he told RIA Novosti.

The scientist noted that the resulting formula is consistent up to the numerical factor with the published experimental data for countercurrent gas centrifuges.

“This is the most surprising thing actually, because the nature of the gas flow in concurrent and countercurrent centrifuges is fundamentally different. We are now investigating why the formula coincides so well with the experiments. In addition, we are not yet sure if the formula is universal. We’re working on this now,” Dr. Bogovalov added.