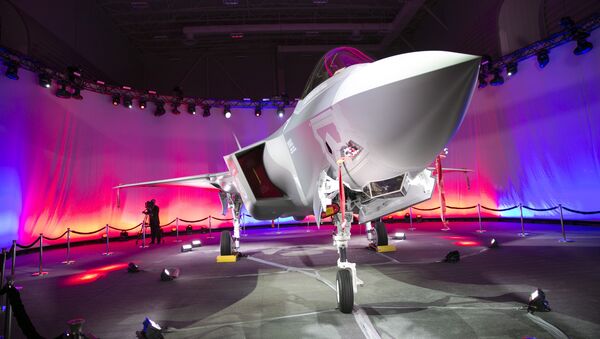 The controversial purchase of US-made F-35 fighter jets is by far Norway's largest public procurement on war machines ever. The rationale behind the much-debated purchase is to be able to attack targets in polar Russia in a hypothetic conflict scenario.

Price Wars: Norway's Defense Minister Under Fire Over Costly F-35 Fighter Jets
The debatable acquisition of the 52 F-35 fighter jets has been Norwegian Defense Minister Ine Eriksen Søreide's perpetual aim, which she has been pursuing at the expense of other military branches. According to Norwegian newspaper Klassekampen, which got hold of a classified government analysis, the fighter jets may be used in an attack against targets in Russia.

The Norwegian government's plan for the use of F-35s involves three possible scenarios. The first one implies a full-scale conflict with Russia and requires a full fleet of 52 aircraft for attacks inside Russia. In the second scenario, the Air Force should handle a momentary crisis in Norway, with twelve F-35s allocated for NATO operations abroad. The third model deals with operation of combat aircraft in peacetime.

In the first scenario, Russian ships and planes are expected to barge into Norwegian territorial waters. The answer from the Norwegian side is to employ all the 52 F-35 fighter aircraft, which are specifically scheduled to be built to avoid detection by radar and thus also evade the long-range Russian air defense missiles. This plan also involves attacking Russian warships and fighters in the Barents Sea and the Norwegian Sea, as well as targets in Russia. The scenario goes by the name "collection of power."

Angry Norwegians Boil Over 'Anti-Russian' Fence
This passage is of specific interest, as large parts of the Russian nuclear arsenal are stationed in areas around Murmansk, close to the border with Norway. The Russian Northern Fleet is headquartered in Severomorsk in the Kola Bay, has numerous secondary bases on the Kola Peninsula and operates dozens of submarines ranging from diesel-electric to nuclear-powered ballistic missile classes. The fleet is charged with defending northwestern Russia and has access to the Arctic and Atlantic oceans. According to Klassekampen, however, neither military bases in and around Murmansk nor Russia's nuclear-powered fleet are listed as potential targets for the Norwegian fighter planes.

In the second scenario, Norway is expected to increase its contribution to NATO's international efforts. In the 2007 long-term plan for the Armed Forces, Norwegian parliament ruled that fighter jets should be able to uphold an international contribution of squadron size to NATO operations, while keeping the domestic demand for air control covered. This goal of being able to handle a momentary crisis in northern Norway and join an international mission abroad still applies. No less than twelve of the F-35 jets will be earmarked for NATO operations outside of the country.

Paranoid Sweden Circles the Wagons Despite 'No Russian Threat'
State Secretary Øystein Bø confirmed in an e-mail to Klassekampen that the government estimation has remained unchanged since 2008. According to Bø, later analysis showed that the number of aircraft needed to address the security challenges has in no way diminished.

Earlier, Norway voiced plans to procure 52 US combat aircraft, thus becoming one of the biggest F-35 buyers in Europe. According to previous estimates by the Ministry of Defense, the price tag will reach roughly 70 billion NOK (some $8.5 billion), whereas the total lifetime expenditure is expected to reach 261 billion NOK ($31.5 billion). The F-35 fleet will be stationed in Ørland, Sor-Trøndelag County, with a supplementary base in Evenes, Nordland County. The first F-35 aircraft are scheduled to arrive in Norway in 2017.