India Faces Public Pressure to Respond to Violence in Kashmir 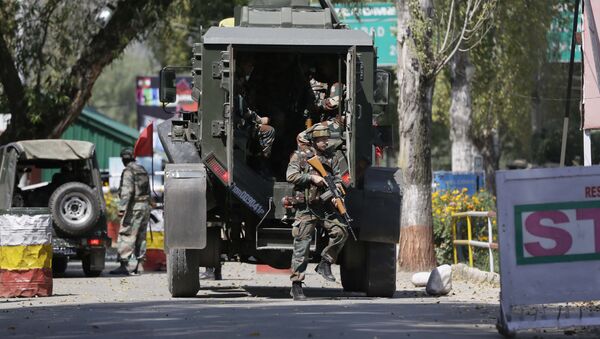 © AP Photo / Mukhtar Khan
Subscribe
The death of 18 Indian soldiers has put huge public pressure on the government to respond, to which they are mulling different options other than isolating Pakistan at the international level.

Sources close to Home Ministry say that isolating Pakistan at the international level is a completely different than an armed response. Airstrikes on terrorist training camps might prompt further escalation of the conflict without acheiving feasible results.

​"Naval forces can deliver a retaliatory strike from anywhere in the international waters and from all dimensions of that space (surface, sub-surface and air). Furthermore, by virtue of its inherent attributes of flexibility and poise, naval power can be applied in a restrained or covert manner — through surgical or precision strikes — to effectively limit its escalation to within the threshold of armed conflict. Hence, the Indian Navy offers a viable option to the political leadership shift from ‘deterrence by denial' to ‘deterrence by punishment,'" Cpt. (Dr.) Gurpreet S Khurana, Executive Director, National Maritime Foundation, suggests.

On Monday, Lt. Gen. Ranbir Singh, Director General Military Operations (DGMO), said, "We have the desired capability to respond to such blatant acts of aggression and violence as deemed appropriate by us. We reserve the right to respond to any act of the adversary at a time and place of own choosing."

It is also believed that before taking any offensive measure the Indian government would strengthen its security presence in its territory bordering Pakistan. On Tuesday, Union Home Secretary Rajiv Mehrishi assessed the situation in Kashmir.