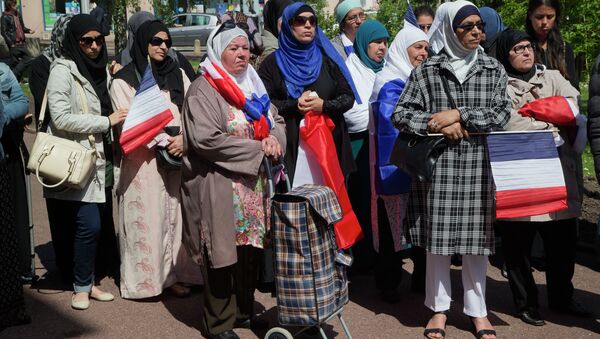 A survey carried out by the French Institute of Public Opinion shows that one quarter of respondents adhere to a strict practice of Islam. In particular, they exalt Sharia Law above the cultural values of the French Republic. Nevertheless, the survey shows that the majority of French Muslims are adherent to French culture, history and ethics.

“It is indeed an interesting study, which allows a new perspective on the presence of Muslim culture in French society,” Houari Bouissa, teacher and specialist in Islamic history, told Sputnik.

The report “French Islam is possible” presents Muslim culture in a new light. It reports that 70 percent of Muslims eat only halal meat and two-thirds of Muslim women say that they refuse to wear a hijab.

“It is possible to combine loyalty to the nation and love to the country and at the same time act as an ordinary French citizen and to adhere to the Islamic spiritual position,” Ghaleb Bencheikh, specialist in the Islamic culture, told Sputnik.

“I believe it comes from low qualifications, cultural poverty and intellectual wretchedness. According to the report, there is a division, which runs through religious requirements and complete ignorance of the Islamic religion. It just became some sort of politically-identified requirements on the part of young people,” added Bencheikh.

As Houari Bouissa believes, it is necessary to integrate these Muslims in the society. In other words, they have to understand their unique place in French culture.

“I strongly believe that it is necessary to include Islam in the history of France. Thus, Muslim pupils will consider French history as their own,” Bouissa told Sputnik.