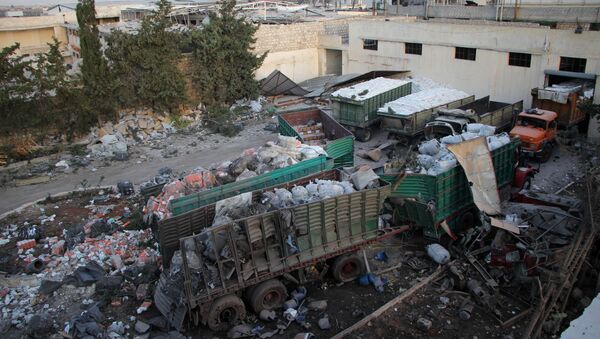 The Russian military unveiled on Tuesday video footage of a UN humanitarian aid convoy that came under attack in Syria, which shows a militants' pickup vehicle carrying a large-caliber mortar as part of the convoy.

The video shows that the UN aid convoy was accompanied by a terrorists' off-road vehicle with a large-caliber mortar launcher, the Russian Defense Ministry spokesman said.

"The examination of the video footage made via drones of the movement of the humanitarian convoy in areas controlled by militants in the province of Aleppo has revealed new details. The video clearly shows how terrorists are redeploying a pickup with a large-caliber mortar on it using the convoy as a cover," Maj. Gen. Igor Konashenkov said.

He said that "it is unclear yet who accompanies whom: the [pickup with a] mortar accompanies the convoy with "White Helmets" volunteers or vise versa. And most importantly, where did the mortar disappear near the destination point of the convoy and what was the target of its fire during the convoy's stop and unloading?"

On Monday, the United Nations’ Office for the Coordination of Humanitarian Affairs (OCHA) said that the aid convoy crossed the conflict line in the Big Orem area of the Syrian city of Aleppo.

Russian, Syrian Jets Did Not Conduct Airstrikes on UN Convoy in Aleppo - MoD
Later in the day, UN officials stated that the convoy had been shelled and there were casualties.

Earlier in the day, the Russian Defense Ministry said that neither Russian, not Syria aircraft carried out strikes against the UN aid convoy, emphasizing that the
examination of video footage reveals no signs of an ammunition strikes on the convoy and it seems to be set on fire.

According to the official, al-Nusra Front terrorist group carried out an artillery attack on the southwestern suburb of Aleppo using multiple launch rocket systems.
Newsfeed
0
Access to the chat has been blocked for violating the rules . You will be able to participate again through:∞. If you do not agree with the blocking, please use the feedback form
The discussion is closed. You can participate in the discussion within 24 hours after the publication of the article.
To participate in the discussion
log in or register
loader
Chats
Заголовок открываемого материала