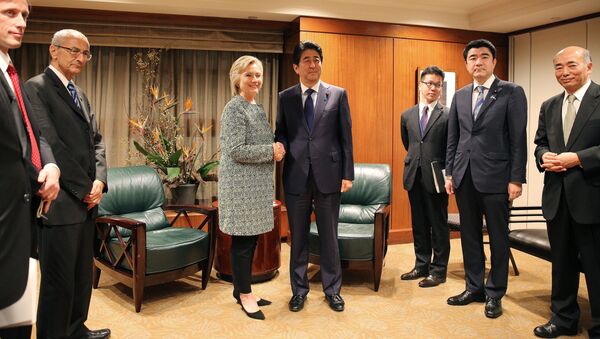 "I would like to further strengthen the Japan-U.S. alliance so it can contribute to the region and the world as an ‘alliance of hope,'" Abe said as quoted by the Kyodo news agency.

Japanese Politician Slams US for Uncovered Political Pressure on Crimean Voters
Clinton, on her part, said that the Japan-US partnership was important for peace and prosperity of the Asia-Pacific region and the whole world.

According to the media outlet, the two sides discussed a number of regional issues, such as North Korea's nuclear and missile threat, China's growing maritime activity and fight against international terrorism.

The two sides also confirmed their diverging positions over the Trans-Pacific Partnership (TPP) free trade agreement, which was concluded last October with the aim to lower tariffs and other trade barriers on thousands of items between 12 Pacific-rim nations, the media said.

Chinese Media Warns US-Japan 'Fishing for Trouble' in South China Sea
In 2012, Clinton praised the pending free trade deal as the "gold standard" for trade agreements. She expressed support for the deal again in 2013 but spoke against the deal in her presidential campaign after being pressured by labor unions and her former Democratic competitor Bernie Sanders.